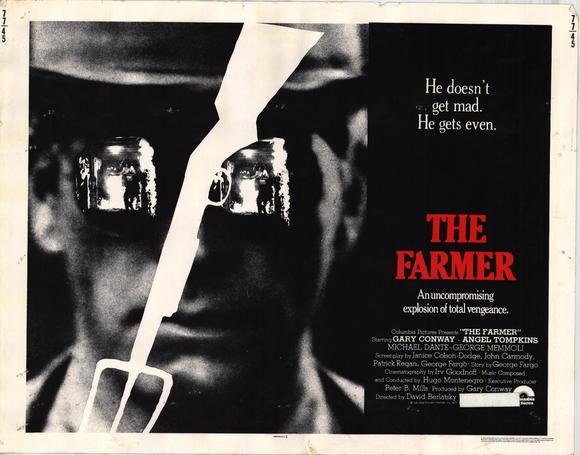 Many movies unavailable on DVD are difficult to find, but if you beat the bushes with hard work and patience (online traders, DVD-Rs at collectibles shows, long out-of-print VHS tapes), most’rare’ movies can eventually be tracked down. Then there are movies like THE FARMER. I saw the violent revenge thriller THE FARMER at the I-44 Drive-In movie theater in Valley Park, Missouri in 1977 on a double-bill with John Flynn’s THE OUTFIT. It’s a vivid memory and I recall my friends and I loving it and talking about it for months after. I began collecting movies in the early 80′s and just assumed THE FARMER would one day find it’s way into my collection. But I’ve searched far and wide and here it is 2009 and, after years of it topping my want list, a return visit to THE FARMER has eluded me. When I mention the title to fellow movie collectors, they either shrug their shoulders or they quote the poster’s tag line and say “Ah yes, THE FARMER. He doesn’t get mad. He gets even!”

Set in the mid 1940′s THE FARMER is the story of Kiel Martin (Gary Conway) a decorated WWII soldier returning home a hero and looking forward to a peaceful civilian life on his farm. On the train ride home, Kiel is beaten by a group of thugs for helping a black soldier buy a drink and thrown off the train. Finally returning home, Kiel discovers that running a one-man farm is not profitable and the bank wants to foreclose. Fate intervenes when a gambler named Johnny (Michael Dante) wrecks his car on Kiel’s farm and Kiel saves him from the burning blaze. Johnny offers Kiel a reward but it’s not enough to pay the mortgage. Johnny crosses the local mob boss Passini (George Memmoli) who retaliates by killing some of Johnny’s friends and blinding him by pouring acid in his eyes. Johnny’s girlfriend Betty (Angel Tompkins) offers to pay Kiel $50,000 to use the combat skills learned in war to kill Passini and his men, setting the path for bloody revenge.

Gary Conway was a body-builder and male model in the 1950′s before landing the title role in 1957′s I WAS A TEENAGE FRANKENSTEIN. Conway’s other cult film appearances include VIKING WOMEN AND THE LEGEND OF THE SEA SERPENT (1957) and HOW TO MAKE A MONSTER (1958) before he turned to TV in the sixties starring in the series Burkes Law, and Land of the Giants. THE FARMER was one his last acting roles and he produced the film as well. Conway now runs a vineyard in California with his wife Marian McKnight, Miss America 1957. Angel Tompkins was a sexy blonde starlet who had a run of leads in mid-70′s Drive-In classics like THE LITTLE CIGARS GANG (1973), THE TEACHER (1974), and THE BEES (1978) and I haven’t seen her onscreen since she played Charles Bronson’s doomed wife (aren’t they all?) in 1985′s MURPHY’S LAW. George Memmoli was a rotund actor who had appeared in Scorsese’s MEAN STREETS in 1973. His back was badly hurt doing a stunt on THE FARMER when he was yanked too hard through a wall, simulating a shotgun blast to his chest. He had been cast as the cuckold backseat passenger in TAXI DRIVER but was unable to play the part because of his injuries so Scorsese himself stepped into that role. THE FARMER was the only film directed by David Bertalasky, a busy editor who had worked with Sam Peckinpah on PAT GARRETT AND BILLY THE KID . In the scene that I (and anyone who’s seen THE FARMER) remember most clearly, Conway is under a car waiting for a mobster and when the guy tries to open the door, he gets his feet blown off with a sawed-off shotgun. Conway then blasts him again at point blank range sending his body flying across a parking garage. Peckinpah must have been proud.

THE FARMER, released by Columbia Pictures in 1977, was one of many Bronsonesque revenge fantasies produced in the wake of the mega-smash DEATH WISH (1974), though its rural setting is more akin to the similar WALKING TALL (1973). I’d love to write a more detailed retrospective of THE FARMER but it’s been 32 years since I saw it at age 15. I do recall it being a straightforward, fast-paced thriller with plenty of bullets, blood and action. I can remember THE OUTFIT, which played right after it (and is also currently MIA on DVD, though it did at least have a VHS release), seeming slow by contrast. Perhaps THE FARMER is not as good as I remember, but I’d like the chance to find out. If anyone can track down a copy of THE FARMER for me, I will trade them my oldest child. THE FARMER is just 33 years old and not a ‘lost’ film, just one that is hiding. It’s lying low, aware of my obsession and mocking me (it’s probably locked in a vault next to a print of Jerry Lewis’ THE DAY THE CLOWN CRIED). But there is hope. A company called Code Red DVD announced in 2004 that they were releasing THE FARMER on disc and even put its trailer on some of their other releases. They had an article on their blog about a commentary and on-camera interview with director David Bertalasky and even put up some screen shots of their transfer. Code Red has a reputation for delaying their releases and it’s been five long years since their announcement. Code Red distributed their titles through BCI Eclipse Corporation, which went under last year so the fate of a THE FARMER DVD is unclear and my emails to Code Red have gone unanswered. If Code Red DVD fails to come through with THE FARMER, I won’t get mad. I’ll get even.