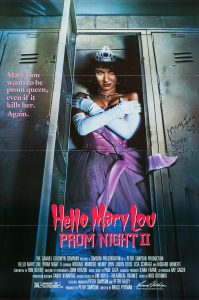 What have The Fly, Invaders from Mars, The Thing from Another World, and The Blob all have in common? They are science fiction films from the 1950s that were remade in the 1980s. The 1980s saw a new enthusiasm for everything 1950s as America – for the first time in three decades – felt more like the society and world leader they imagined themselves to be in that earlier post-war decade. Helping this optimistic reinvigoration of nationalist sentiment along were such factors as Reagan’s neo-conservative government, the growth of economic rationalism, Russia’s withdrawal from Afghanistan, an end to the Iran Hostage Crisis, the meteoric rise of computer technology, and unprecedented increases in wealth accumulation and consumer fetishism. University survey’s conducted in the 80s revealed that American values among young adults had returned to a conservative high not seen since the 1950s. With all of these cosmetic similarities between the two decades, its no wonder that fashion, music and movies returned to the halcyon days of McCarthyism, anti-communism, nuclear paranoia and conspicuous consumption. Indeed, in the New Hollywood of the 80s there was a general shift among audiences towards juvenile escapist fantasies rather than cynical social realist dramas of the 70s. So what does all this have to do with Hello Mary Lou: Prom Night II (PN2)?

The renaissance of everything 1950s in America is a key concern of PN2, and typical of horror films that, in general, capture the zeitgeist fairly accurately. PN2 provides a particularly impressive visual metaphor for the regeneration of the 1950s within a 1980s context when, at the prom, Mary Lou quite literally emerges from Vicki’s body. Prior to this “rebirth,” Vicky – possessed by the vengeful spirit of Mary Lou – dresses in 50s clothes, uses anachronistic phrases from the 50s (“See you later, alligator”), and listens to 50s music. The film is as much an intelligent and insightful observation of 80s neo-conservatism as it is a camp, clever and visually striking horror romp.

Reviewers that have not enjoyed the film scathingly pointed out the extent to which PN2 borrows from Carrie and The Exorcist. Yet this is all part of the twisted pleasure of the film. Take it too seriously and the acerbically clever joke is on you. For through its derivative nod to Friedkin and De Palma’s films, PN2 locates itself very clearly within firstly, a post-Exorcist era when every second horror film in the 70s borrowed something from The Exorcist (the most financially and critically successful horror film in history), and secondly, a post-De Palma era in which it pays homage to a director who pays homage to a director (Hitchcock), resulting in a playful mise-en-abyme.

PN2 is also a really good looking film. It features some solid stylish special effects and well executed set pieces that predate those in the later campier instalments of the Nightmare on Elm Street franchise. As we know, Mary Lou makes several unsuccessful attempts to possess Vicki. She comes to Vicki when she’s alone and vulnerable, invading her personal space. Some of these possession attempts involve some truly creative filmmaking involving good old fashioned in-camera special effects. This of course was an age when a major part of filmmaking was still problem solving – an age when audiences were still asking, “How did they do that?” An age before digital boredom. In one sequence from PN2, the rocking-horse in Vicki’s room starts to move by itself and takes on a demonic visage, with its eyes rolling, its brows creasing and its tongue lolling about. In another sequence, Vicki is alone in a classroom when chalk writing mysteriously appears in reverse on the blackboard, seemingly written from inside the board (the words “HELP ME” appear, one of the many nods to The Exorcist). When Vicki approaches the board, it suddenly becomes a liquid state and black hands reach out and pull her into the inky blackness. After struggling to stay afloat as the board becomes a whirlpool, Vicki is eventually pulled under (or inside) as the dark waters swirl around her. After she disappears, the blackboard returns to its solid state and the letters that had been swirling around are now scattered randomly across the board.