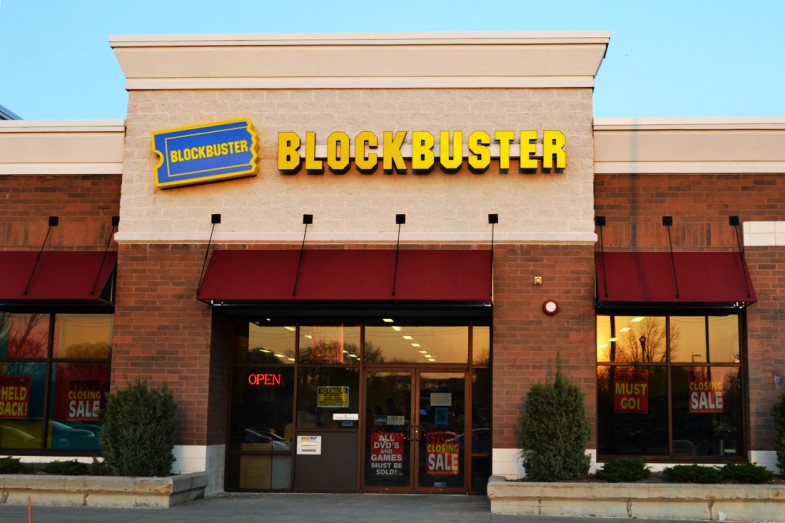 It’s unfortunately true what they say. You don’t really feel the nerve pinch of loss until it happens in your own neighborhood.

And so it finally happened to me, with the death of my favorite Blockbuster video store (one of many in the area currently closing). We have all seen many of these chain stores close in recent years, and perhaps like me you thought “wow, that’s too bad—now I’ll have to go to this other one down the street.” We lamented when local favorites Video Visions and Video Adventures closed its doors, and perhaps we even blinked when Hollywood Video went bankrupt. But Blockbuster should have seen the writing on the wall (or at least read my prognostication two years ago) that its business practice and partnership mistakes and the oncoming rush of technology would make them obsolete.

This is the major driving factor, of course, to the loss of another brick-and-mortar location. Why peruse a store when you can get the lastest release from a vending machine like Redbox? Why bother leaving the house when you have a cable service like Time Warner with movies available on demand? Better yet, if you have a Wii, XBox 360, computer, or smartphone and a Netflix account you can get movies and television shows wherever you are.

In a day and age in which a full-length movie can be downloaded on your phone in a matter of minutes, it’s not difficult to understand that a major blockbuster (small ‘B’ here) release can be available less than six months after the theatrical premiere. Some experimental strategies even have new movies appearing on-demand at home, such as recent films Melancholia and Tower Heist. Moreover, there are more movies being shown than ever before so that a multiplex of 16 could possibly show a different movie on every screen.

No one seems to notice anymore when movie theaters raise prices. Did you notice that Marcus Theaters bumped ticket prices up 50¢ in March (right before Hunger Games)? Did you notice when they did the same thing a few months ago? And some months before that? Did you notice the concessions have all bumped up at matching intervals?

Maybe not. Going out to the movies still remains an event, with big spectacle action pieces and big-name comedies dominating what we’re willing to shell out top prices. Going to the video store is more about catching up on stories, pop-culture references and relaxing on the couch. The video store, even the Blockbuster stores, have deeper libraries than any grocery store vending machine (Blockbuster had some ‘boxes’ but eventually sold them to Coinstar, who owns Redbox) or online service like Netflix (who recently got rid of many older movie titles in favor of TV series). You have the option of Amazon or Hulu, but while the prices on the first are attractive and the Criterion Collection on the latter is intriguing — neither have the subscription service or depth to make them worthwhile.

This store in Hales Corners was my last in which I could cling to a tactile experience. I was on the “mailer” program, in which a DVD is sent by mail to my house. I could then watch it and return it for another. For $12 a month, it was a good value. I remain on a scaled down version of this program at $9 a month — mailers only (there is no flat subscription rate for Blockbuster’s on-demand internet service, unless you belong to DISH Network). Netflix advertises its streaming-only plan as $8 a month, but the library isn’t as deep.

The biggest complaint of all is the loss of special “extras” that came with DVDs. There was a time in which outtakes and behind-the-scenes were hidden “Easter Eggs.” Then they were a standard item. Then Blu-Ray came along, and these special features moved there with the idea that you have to buy into getting extras. Blockbuster store rental versions got rid of them, and downloads/streaming often do not have them. You get what you pay for, apparently.

I should be applauding the reduction of plastic in the world, or that another giant corporation failed (or in this case, was bought at auction). But my sorrow is in the loss of my real ability to walk into a place, say hello to my favorite clerks, and see everything in front of me before I went home to escape reality for awhile.