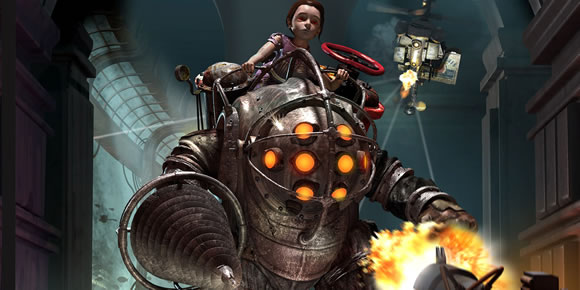 Universal Pictures remains undecided about a future film adaptation of Bioshock. After Gore Verbinski, who was on board and ready to do the film, dropped out, Juan Carlos Fresnadillo (Intacto, and 28 weeks Later) took over and was ready to go, only to jump off leaving the big screen adaptation of Bioshock director less. Fresnadillo commented, “To be honest, by now, I’m completely out of that, and developing other stuff… Right now it’s on hold. The studio and the videogame company, they have to reach some kind of agreement about the budget and the rating.”

The studio reportedly wants the film to be a low-budget PG-13 movie, while Ken Levine and other game developers want to create a high quality R-rated film that will stay true to the games tone and story. Previously, Verbinski commented that it had to be a hard “R” film, saying that “We’re working trying to make it. The problem with BioShock was: R-rated movie, underwater, horror. It’s a really expensive R-rated movie. So we’re trying to figure out a way working with director Fresnadillo to get the budget down and still keep so it’s true to the core audience, you know? The thing is it has to be R, a hard R.”

It has been suggested that if the game developers don’t get what they want they will end up taking it to another studio. We’ll have to sit tight and see for now; Universal Pictures seems to be content to shelve it for now, which is what frustrates fans.

Here’s what Levin said last year: “for us there’s no burning desire to have a movie made just to get it made. For us and for Take-Two, it’s really got to be something that will a: give the fans something that they want, and b: for those who don’t know BioShock, really introduce them to something that is consistent with the game, and is it going to be a good representation of the game. There are differences between games and movies, no doubt, but the movie has to draw from the same DNA in terms of the world and the story beats. But you know, we don’t have a need to get it made.”

The question is, if or when this project gets off the ground, who might direct it now that Fresnadillo has bolted.

BioShock is a survival horror first-person shooter video game developed by 2K Boston and designed by Ken Levine. It was released for Microsoft Windows and Xbox 360 on August 21, 2007. Set in an alternate 1960, the game puts the player in the role of a plane crash survivor named Jack, who must explore the underwater city of Rapture, and survive attacks by the mutated beings and mechanical drones that populate it. The game incorporates elements found in role-playing and survival games, and is described by the developers and Levine as a “spiritual successor” to their previous titles in the System Shock series.

Juan Carlos Fresnadillo is a Spanish film director, script writer, and producer. His film Esposados was nominated for the Academy Award for Best Live Action Short Film in 1996.