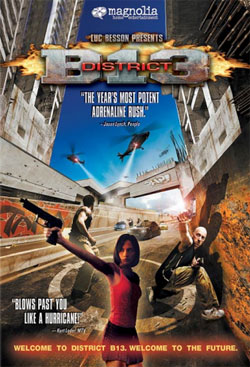 Before putting on District B-13 you might want to start with a quick safety check: push back the coffee table and move the floor lamp away from the couch. You’ll need room for thrashing. Next, turn the bass up on your subwoofer and crack a beer. Now get pumped for District B-13.
District B-13 (2004) is one of several films that director Pierre Morel and screenwriter Luc Besson have so far collaborated on and is also probably their best. That’s no small claim, considering their other films include The Transporter (2002), Taken (2008) and From Paris With Love (2010), to name a few. So if you liked the heavy-hitting panache of those three films, District B-13 is a definite must-see.

In District B-13 Morel brings in martial artist, Cyril Raffaelli, and Parkour founder, David Belle, to help carryout his ass-kicking agenda, which is done with all the elegance of an MMA match on a trampoline. The film is set in the near future in a Paris ghetto, or banlieue, known as B-13. Though the city has allowed B-13 to fall to ruin, one local resident, Leïto, who’s played by Belle, decides to fight back against the drugs and gangs that are destroying his neighborhood. Not surprisingly, this puts Leïto on the bad side of Taha, a notorious drug kingpin, played by Bibi Naceri. After Taha and his massive army of men are permitted to kidnap Leïto’s sister by the local police chief, Leïto kills – ahem, decapitates – the police chief and is placed in prison.

Six months later, Taha’s men steal a neutron bomb, which is triggered and set to explode in 24 hours. Damien Tomaso, an undercover police agent played by Raffaelli, is put on the mission to deactivate the bomb. Knowing he’ll never succeed alone, Damien is forced by his superiors to solicit help from Leïto by breaking him out of prison under the guise that Damien is himself a prisoner. Of course, Leïto’s no fool, his street smarts see through Damien’s act immediately, but they have a common goal to work towards – saving Paris. Serious, I mean serious, ass-whooping pursues.

District B-13 isn’t a good movie in the traditional sense. The characters are pretty two-dimensional and mostly stereotypes, anyway. And the plot is certainly clichéd. Furthermore, the blind stab District B-13 takes at making a political statement for its conclusion is so misguided and hypocritical that it’s almost laughable. But never mind that. This is an action movie, son. When shit starts popping off you don’t stop to think about plot and morality, you just run and jump. And when you do, just be glad you moved the coffee table.