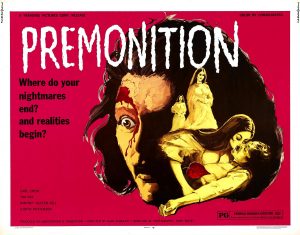 A sidestepped horror film mostly noted as an early effort from Alan Rudolph, PREMONITION is a hazy, mystical horror outing which involves a hippie music group taking residence in the pastoral outlands of the San Francisco Bay Area. Various interpersonal hostilities are vented, and numerous doobies passed around before they begin experiencing collective nightmares/hallucinations of impending doom. It’s implied that this is a paranormal brain response triggered by exposure to strange red wildflowers, though there may be some nebulous connection to a malformed skeleton unearthed by one of the band members during an archaeological excavation some years earlier.

PREMONITION is a distinctly early-70s product, alight with post-psychedelic artistic pushiness and intermittent brushes of electronic music by pre-famed Harold Budd. It’s an ambling, occasionally intriguing work of psychotomimetic vagary, and probably too experimental and ambiguous for mainstream audience appreciation. While the film has definite handicaps, primarily with pacing and concatenation, it does possess a gauzy “will-o’-the-wisp” eeriness which is unique and variably effective.