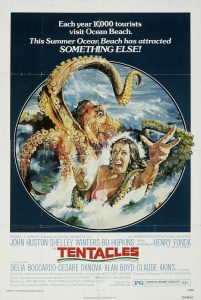 Directly minted from the same cookie-cutter that was forged by “Jaws”, “Tentacles” attempts to tell the thrilling story of a seaside community under duress when it is visited by a giant octopus that has the ability to “suck a human being dry, right down to the bone”. The movie fails on almost every level imaginable.

A very mystifying thing indeed is the fact that so many esteemed actors were involved in this mess. Henry Fonda’s performance is very brief; actually “Tentacles” signaled a brief run of horror thrillers for Fonda, including “Rollercoaster”, “The Swarm”, and “Meteor”. But what is John Huston doing in this? Shelley Winters, Bo Hopkins and Claude Akins also are on hand, although they look a little more at home here. The rest of the cast is comprised mostly of Italian talent with nothing to do.

“Tentacles” is extremely boring, and ludicrous for all the wrong reasons. The movie sets up all sorts of dialogue intended to outline just how seriously scary an octopus can be, such as when one of the characters solemnly states that suction cups on an octopus are worse that tiger claws. Scary, huh? Well, the filmmakers didn’t do much research about octopuses and how they eat. That’s OK though, because I’m pretty sure they also don’t roar like an underwater lion the way this one does. I’m positive that they do not swim with their heads sticking out of the water, either, and perhaps the most hilarious liberty this movie takes with reality is that it’s titled “Tentacles”…and octopuses do not have tentacles (they have arms with suckers, but a tentacle is a long appendage with suckers only at the end; a squid usually has two, octopuses have none). One of the characters in film actually refers to the monster as a squid, a serious insult to any respectable octopus. Whatever it is, it’s on a rampage because of Henry Fonda’s company, which is using radio waves while digging an underwater tunnel. Uh huh.

There are a few startling shots in the film, one of them being the sight of one victim’s legs jutting up out of the water as he is dragged down by the monster. The other effective sequence is the destruction of the yacht and the subsequent stalking of the woman who escapes. But it’s too little to hold interest; there are no scary kills in this movie, and nothing to dread.

At least the shots in the ocean have gorgeous scenery. When the film is on land, it’s abysmal. Shelley has literally nothing to do and no reason to be in the movie; she isn’t threatened by the octopus at all, she’s merely on land for the purpose of going into a panic while her son and a friend are offshore being attacked in a sailboat. Apparently the director felt that when a giant octopus attacks, what we really want to see are scenes of a large woman shouting into a walkie-talkie. This scene is also notable because of the very weird “entertainer” dressed like Uncle Sam, stomping around a crowd of people who are applauding at nothing. Directed by Ovidio Assonitis, the man who brought us the unfathomably awful “Exorcist” ripoff called “Beyond the Door”, this movie employs his familiar and unexplainable habit of inserting inappropriate freeze-frames during moments of action, resulting in a scene that looks as if the editing equipment broke down. John Houston’s character is a reporter who takes way too long to figure out something in the water is stalking and killing people. Akins plays the same character he always plays, a sheriff. Hopkins is the poor chump placed in charge of getting rid of the octopus. The very lovely Delia Boccardo is on hand as Hopkins’ octopus-bait wife, although Bo himself looks pretty good in a towel.

I’ve got to mention the soundtrack, too, which is moody at times, utterly bizarre and inappropriate at others. The “suspense” theme of the film seems to have been performed on a synthesizer with a harpsichord voice. The main attack scene, where the octopus knocks over a bunch of sailboats at a regatta, pumps the ‘suspense’ cue into a full-fledged musical piece that sounds strangely like an interpolation of the theme to the “Wonder Woman” TV show.

The only real goods are the underwater photography, which actually is very atmospheric, even beautiful. You also might be surprised at the way the monster octopus is dispatched at the end. Then again, you might be disturbed, because it seems to me as if the filmmakers really did tear apart a live octopus.