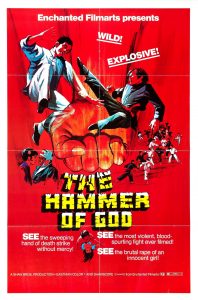 Good production values highlight this old-school kung fu movie which is packed with all the crazy action and excessive violence that you could hope for in a martial arts movie. Sure, the plot may be familiar and simple stuff to any genre fan, with the typical Japanese portrayed as the cruel bad guys and a young, everyday Chinese guy becoming the hero and training to take on the bad guys by using the usual methods of running with iron bars attached to his ankles and sticking his hands into a cauldron of red-hot iron filings. However, the direction – also by star Jimmy Wang Yu, who wrote the story on top of this – is lively and imaginative, the fight sequences nicely choreographed and the settings, which include a wintry landscape complete with falling snow, picturesque. Often the film is enlivened with a bright red splash of gore to highlight the action and worry the censors.

Jimmy Wang Yu – who was something of a star in China at the time, appearing in other Shaw Brothers classics like THE ONE-ARMED SWORDSMAN – is acceptable in the leading role, conveying emotion when the script calls for it and displaying his athleticism in the action sequences. The supporting cast is mainly populated by caricatured bad guys who strut their stuff menacingly well, with Lo Lieh a real stand-out. The only offensive thing in the film to my mind is an ill-conceived rape sequence which feels unnecessary and out-of-place, even though nothing explicit is shown it still leaves an unpleasant taste. Where The Chinese Boxer hits home is in its imaginative touches, both in the directorial style and the many fights. The scene in which Wang Yu bathes his hands in iron shows him surrounded by macabre decaying dummies which proceed to disorientate him – a visual nightmare sequence straight from a horror movie. Another moment has two samurai swordsmen chopping up a dozen cage birds from the air to display their skill – what cold bastards. There’s also a surprise homage to Sergio Leone’s THE GOOD, THE BAD AND THE UGLY as two fighters measure each other up.

Amongst the well-staged scenes of action are two large battles, one taking place in a casino in which Wang Yu dispatches dozens of black-clad bad guys, wearing a mask and gloves and looking bizarrely like a surgeon as he does so. There’s also a spectacularly violent massacre which shows a man having his eyes gouged out in graphic blood splattering detail, much to the sadistic viewer’s enjoyment. Other gruesome highlights include many bloody punches, bone-breakings, surprise decapitations, and a literal geyser of pumping blood. Marred by only a few flaws – one of which is a serious lack of music – The Chinese Boxer is an entertaining and violent kung fu romp with all-out action for the genre fan to enjoy. Simple, yet fun.