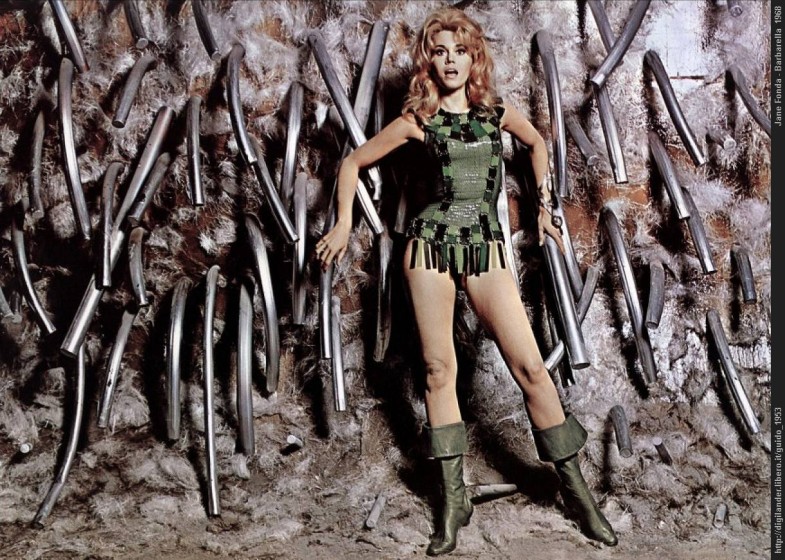 If you are in the right mood, BARBARELLA can be viewed as an amusing piece of campy silliness. If you aren’t in the right mood, in may come off as a stupefyingly insipid piece of soft-core almost-but-not-quite-porn. BARBARELLA was pretty hot stuff for it’s time, with a broadly played comic book approach, mixed with a touch of the psychedelic, it rather boldly exploited sex in the spirit, if not the style, of Playboy magazine. Whether its low-budget tackiness is a result of its design or a result of actually having a low budget isn’t clear, but certainly its amateurish quality gives it a distinctive style – which is either part of its charm or part of its curse. Depending on your mood. An amusing distraction while watching it might be trying to determine what part of it is the cheesiest: the sex, the special effects, the set design or it’s cheerfully chirpy musical score. My vote would go to the costume design; no doubt created to make Barbarella look outrageously sexy, all of Jane Fonda’s many changes in wardrobe look as though they had been borrowed from a particularly low-rent/high-tech strip club.

The story takes place in the 40th century, where Barbarella is some sort of agent from the Republic of Earth. She is ordered to go to the planet SoGo to find Dr. Durand Durand and to stop him from using some sort of weapon he has invented. That’s not much of a plot, but it is enough to get Barbarella started on her real agenda, having sex.

Probably the key weakness with the film is the pivotal miscasting of Fonda as the title character. She is just fine with the central demands of the role, the numerous instances of gratuitous nudity; however Fonda has never excelled in comedy and is even less effective at playing wide-eyed innocents. Fonda just can’t play dumb and being at least a bit spaced out is a basic characteristic of Barbarella. Other than a few moments here and there where it is clear that Fonda realizes just how ridiculous the material is, she otherwise plays it straight, which is not to the film’s benefit. Fonda’s star was on the rise at the time, a starlet winning acceptance as a serious actress, and she was just on the verge of becoming a political activist. Having such a prominent star take a role in such a, well… sleazy production must have been quite a coup – though at the time being the wife of the director, Roger Vadim, no doubt, had a great influence on her taking the part. Even so, you get the feeling that Vadim is exploiting his wife to promote his career, rather than showing much concern for hers.

BARBARELLA isn’t without it’s nice touches. For one, there is David Hemmings as a would-be revolutionary who can’t hide his embarrassment when his technological gadgets don’t work right. And John Phillip Law is blissfully serene as a blind, but rather hunky, angel who captures the sense of innocence that escapes Fonda. On the whole, however, (unlike Miss Fonda herself) BARBARELLA hasn’t aged well. It’s trippy attitude and wishful views of intergalactic politics was naïve then and just dopey now. Yet BARBARELLA is one of those films that wasn’t appreciated in its day (and still isn’t very good) but has nonetheless achieved cult status. And admittedly making a film so off beat, that blends fairy tales and politics and sex, even if it fails, does take a certain boldness (and possibly certain illegal substances).