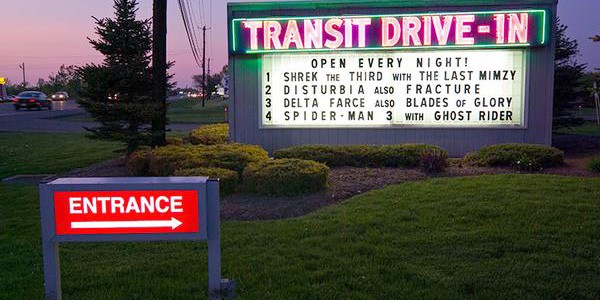 Running the snack-stand cash register at the Blue Fox Drive-in Theater, owner Darrell Bratt knows that every penny he earns will matter when it comes to the day his operation has to make the transition from traditional film to digital.

“This is a hard road to go down, but the reality is that if we don’t go digital, we are done,” said Bratt, who says purchasing a projector that can handle digital movies will likely cost him about $80,000.

“That’s a heck of a lot of popcorn to cover the cost,” he said.

The Blue Fox is among thousands of independent, family-run theaters across the country that are being forced to purchase expensive new equipment to accommodate the movie industry’s shift from traditional film to digital.

According to Patrick Corcoran, director of media and research for the National Association of Theatre Owners, small theaters, both indoor and out, will be most affected by this change. While there’s no way to know how the shift to digital will affect each individual theater, as many as 10 percent of screens may go dark rather than invest in the new technology, he said.

The impact could be greater on drive-in theaters, which have waned in popularity since their heyday in the 1950s. According to figures from the United Drive-in Theatre Owners Association, of the 4,063 drive-in theaters that were in business in 1958, only 366 remain.

Like many other small, family-run theaters across the United States, drive-in theaters are facing a choice between shifting to digital movies or sticking with the traditional 35-millimeter films.

However, it’s not much of a choice for the owners – by the end of this year, theaters that stick with film will only be able to screen older movies or small, independently produced ones. The blockbusters that bring in the crowds will all have gone digital.

The main impediment to making the switch is that it’s expensive. For small, indoor theaters, the cost for a projector for each screen starts at $40,000.

But for Bratt, his cost will be twice that amount. That’s because he needs to project movies at a screen across a field, rather than just across the room. And the image needs to appear bright and clear despite competing light.

“Unlike an indoor theater, we can’t turn the lights down,” Bratt said.

Bratt said the transition will have a big impact on the theater’s budget. If the money was to come from snack-stand sales, he’d have to sell some 30,000 tubs of popcorn to cover the cost.

The Blue Fox opened in 1959, when drive-in theaters were booming and sleepy Whidbey Island offered few activities for teens and families. Despite a decline in attendance and an increase in competing entertainment options such as Netflix, the drive-in continues to draw a following of loyal locals in search of affordable family entertainment.

Bratt and his wife Lori took over the business in 1988 at the tail end of a wave of drive-in closures across the country. To draw more customers – and keep them on site longer so they spend more money at the snack counter – they expanded their game arcade and added a go-kart track.

The Blue Fox is not the only local, independent theater going digital, despite the expense.

The Clyde Theater in Langley, which celebrates its 75th anniversary this year, went digital in December, owner Blake Willeford said.

To pay for the upgrade, the price of a movie ticket went up by $1. Willeford said it would take several years to bring in enough revenue to cover the cost.

At the Rose Theater in Port Townsend, owner Rocky Friedman has turned to the entire community for donations to help cover the estimated $200,000 cost of conversion.

“Over 400 people have contributed so far,” Friedman said. “It has been very gratifying.”

At the Blue Fox, the Bratts are taking a similar approach. They’ll accept donations, of course, but right now their focus is on selling glow-in-the-dark “Save the Drive-in” t-shirts for $20 each to raise money for the project.

Bratt said he started his t-shirt campaign this month and so far it’s been well received. He’s gotten orders from fans as far away as New York and Alaska.

“Realistically, the t-shirt sales won’t cover the entire cost,” Bratt said. “But they will help.”

Bratt said that the fundraising effort will also be critical if they need to ask the bank for a loan.

“Banks are not lending as readily, but if we can show some success with our fundraising efforts they might be more willing to loan to us,” he said.

Also a big factor in the Blue Fox’s ability to afford new equipment is concession-stand sales. Theaters sometimes get to keep as little as 20 to 40 percent of each movie ticket they sell. As a result, the Bratts have to sell a lot of popcorn, burgers, pizza, candy and pop in order to make ends meet.

And sometimes, the theater spends more to screen a film than it brings in from ticket sales.

Fans of the Blue Fox said they’re happy to support the Bratts in their efforts to bring in some extra money to pay for the transition.

“We plan on buying t-shirts,” said Amber Wiles, who lives in Mount Vernon. “I love this theater.”

Wiles brought her daughter Alyiah Wiles, mom Lori Walton, and sister April Walton to the Blue Fox Drive-in on Friday for a girls’ night out. It was the first visit for Lori and April, but it won’t be the last, they said.

“I grew up with drive-ins,” Walton said. “I would hate to see another one close.”

Bratt said he’d like to get the entire community excited about saving Whidbey Island’s one and only drive-in theater. Kind of like back in 1998, when friends and neighbors pitched in to help his family build and erect a new movie screen after a big windstorm destroyed the original one.

“The community was very supportive,” Bratt said. “A lot of people offered their labor, including several contractors.”

Bratt said he knows the Blue Fox holds fond memories for generations of Whidbey Islanders who went to the landmark theater on everything from first dates to family outings.

“One way or another we will get it saved,” Bratt said. “As our t-shirts says, ‘The show must go on.’”