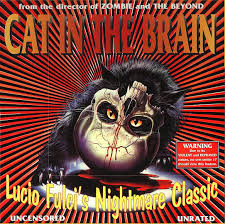 “Cat In The Brain” is a series of extremely violent sequences knitted together by a plot that feels more like an overview, describing director Lucio Fulci’s most notorious years of film-making. The movie could also be seen as a dark comedy of sorts, effectively spoofing the various claims that violent cinema causes violence in real life. Fulci goes further than that, he casts himself as the star, the central figure of the film thus showing the audience who is the man behind all the cinematic gore. “Cat in The Brain” is not about presenting a clear story and following it. Instead it pokes fun at some of the clichés that have been surrounding the horror genre for years.

Lucio Fulci plays himself as a horror director struggling to keep his humanity intact. Years of violent film making have finally began to reach him. It starts slowly, steaks and meat in general begin to disgust him, his colleagues assure Fulci that all he needs is some rest. But that doesn’t help and soon the grotesque ideas for his movies begin to overwhelm his daily thoughts. In an attempt to find a cure for his dangerously maddening mental state Lucio starts going to the local psychiatrist. Unfortunately that does more wrong than good and Fulci is thrown into an even bigger mess, as the psychiatrist turns out to be a psychopath, who mimics the murders from Fulci’s films in real life.

The film retains all the trademarks of Italian splatter cinema, good or bad they are all here. So any comments about the acting or the technical aspects and budget constrains are quite irrelevant as to the quality of the film. It is a visual experience, no doubts about it. Fulci throws in an incredible amount of violence easily surpassing pretty much everything he’s made. Amputated by chainsaw limbs, cannibalism, child murder, decapitation, these are just some of the many grotesque acts witnessed in “Cat In The Brain”. Some of them are obviously recycled from a few the director’s less profile movies but they don’t stand out of the context, and actually feel quite at home here. As I noted before the movie exists much better as a satire of the genre rather than a serious piece. The way some of the violence is presented does help establish that idea. Such sequences shortly after climax are rejected by the reality in the film, as they are revealed to be actually scenes inside a movie that Fulci’s character is directing. This sort of “film in film” presentation lessens somewhat the impact of the gore. But in no way does it make it an easy to watch film. Oh no this is far beyond and above the levels of gore found in mainstream horror, and gorehounds will in no doubt be satisfied with that fact.

Lucio Fulci was a very polarized figure. People either hate his work or love it. “Cat in the Brain” won’t convince any of Fulci’s detractors in the opposite but it is nevertheless an interesting part of his filmography. One that fans should really check out.