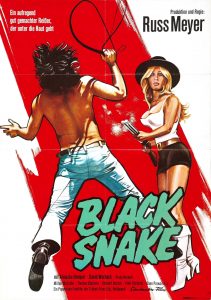 It’s no wonder BLACKSNAKE was a B.O. failure. It’s just terrible. Trash-o-rama. Jaw-droppingly bad. It’s a quasi-campy take on slavery, if you can imagine that. The end result is jarring. One minute, we’re in typical Meyer territory: exuberant, playful and silly, and then the next minute, super serious meditation on slavery and violence. Huh? It just doesn’t work. The slavery/racism aspect is woefully mishandled and veers this movie in the true exploitation category. But BLACKSNAKE is not as sleazy as ILSA SHE WOLF OF THE SS and those kind of films, so I imagine fans of the latter were disappointed by it, which would explain the almost lack of interest in this movie from either exploitation fans or Russ Meyer fans. Meyer blames the failure of BLACKSNAKE because, and I quote, “It didn’t have enough breasts in it.” Well, I’m sorry Russ, but the film is just bad, breast or no breasts. But he’s right though about the low breast quota. Except for Anouska and the maid, the film’s cast is male. Meyer replaces his usual bevy of buxom babes with throng of hunks with massive pecs, in the form of anonymous black actors playing the slaves and the big David (Darth Vader) Prowse. And with Anouska’s right hand man around, who is portrayed as a ruthless but clever gay man who enjoys the power he has over the men, one can only wonder what Meyer was really trying to create here.

BLACKSNAKE stars David Warbeck, who is lusted after by Anouska and her right hand man. Poor David. He looks totally befuddled by the whole experience. He did seem to have fun making the movie but you can clearly see that, at times, he has no idea what’s going on. And then there’s Anouska Hempel. She’s a beautiful woman…for the 1970s, not the 1870s. With her makeup and hair, she looks like a typical 1970s Brit pin-up babe than a turn of the century dominatrix. And her wardrobe is hilarious. At one time, she actually unzips her leather boots! I didn’t know they had zippers in those days. But the character she plays is, in itself, really degrading (no pun intended). She’s nothing but a cipher to the object of lust and scorn of every men (and that woman) on the island. For example, one night, when David and Anouska are getting it on, her annoying slave driver walks in the room, knocks David unconscious and tries to rape her, groping her savagely. The next day, the slave driver is still working for Anouska and the two act as if nothing had happened. It’s totally ludicrous. Under any circumstance, had her character been a real person, Anouska would have whipped the slave driver senseless and kicked his butt off the island. Or even killed him. But the fact that the woman keeps him on her plantation after he tried to rape her is stretching the flimsy story and characters’ credulity to the max.

Ridiculous details like this, and the thoroughly startling blaxploitation angle makes BLACKSNAKE a strangely unpleasant but watchable movie. Watchable in the train wreck variety. I just couldn’t help but watch the film for the utter baseless aspects of it all (the excellent cinematography sorta makes it easier to watch). So, this being an exploitation film, I guess it succeeded in doing what it was supposed to do. But BLACKSNAKE is mainly for Russ Meyer completists.