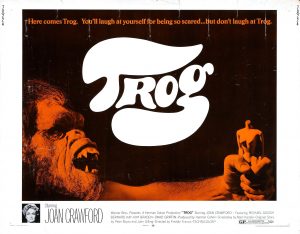 Trog is set in England where three potholers Malcolm (David Griffin), Cliff (John Namil) & Bill (Geoffrey Case) discover a new cave entrance in some marsh land, they enter the cave & explore where Bill is killed by an ape like creature. Malcolm & Cliff rush to the nearby Brockton Research Clinic for help where the renowned anthropologist Dr. Brockton (Joan Crawford) hears about the incident, she becomes convinced that this ape like creature may be the missing link & organises another trip into the cave to capture it. Having done so Dr. Brockton is sure that the creature is a Troglodyte & as such names it Trog (Joe Cornelius), she believes that Trog can reveal to mankind our origins but there are other’s who see Trog as a monster that should be destroyed…

This infamous British production was directed by the usually reliable horror genre regular Freddie Fancis but even he can’t save Trog from being a total disaster on all counts, Trog is the sort of film that the Golden Turkey awards were invented for. The script is a silly mess only made worse by the production values, basically every aspect of Trog goes towards making it a jumbo sized Turkey on all counts. The script never really addresses the obvious question of how this Troglodyte managed to survive into the present but some vague theory about it being frozen in ice & then thawed out is just plain ridiculous, Trog takes itself very seriously & the idea behind the film is just plain silly & certainly doesn’t work on any dramatic level. Then there are the character’s who are all badly written especially Dr. Brockton herself who treats Trog like some sort of pet & with camp scenes of her yelling at him, playing ball with him & giving him plastic dolls I was left wondering how any of the cast members managed to keep a straight face as I am sure the majority of the audience couldn’t. There’s one scene where Brockton claims Trog is not a carnivore yet in the same scene proceeds to feed him fish & lizards which, the last time I checked, were meat. The pace is fair & the next unintentional laugh isn’t too far away but then the film switches gear at the end & tries to be scary with Trog going on a rampage through a village (all one street of it) & kidnaps a young girl for no apparent reason. There’s a boring sub-plot about a local man trying to get Trog destroyed as he thinks it’s dangerous but it goes nowhere & we never find out the court’s decision anyway & despite Trog killing a man all that is mentioned is him killing that stupid dog, I mean wouldn’t the fact Trog killed a man have more weight & be of a much more serious nature than killing a dog? All in all Trog is a really bad film with the occasional unintentional laugh but overall it’s rubbish.

Trog himself looks pretty bad, it’s obviously just an actor in a face mask which is a different shade of colour to the rest of his body & Trog isn’t scary at all & in fact he’s a little bit as likes to play with girls dolls & wear pink scarfs. There’s a bit of gore including a butcher getting impaled on his own meat-hook. There’s a sequence in which Trog remembers various Dinosaur’s fighting, these scenes were taken from the Irwin Allen film The Animal World (1956) & are tinted annoying colours for some reason. At one point Trog flips a car over on it’s side & then it explodes for no reason whatsoever, strange. According to the IMDb the Trog ape suit was a left over prop from Stanley Kubrick’s sci-fi film 2001: A Space Odyssey (1968) while Joan Crawford joked that if she wasn’t a Christian she might have committed suicide from the embarrassment of being in Trog.

Filmed here in England this looks pretty cheap with plastic cave sets, bad effects & a drab low budget look about it. Trog was the last feature film Joan Crawford ever made while Michael Gough deserves better than this.