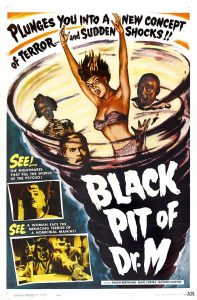 After Dr Mazali (Rafael Betrand) makes his dying colleague Dr Aldama (Antonio Raxel) promise to reveal the secrets of the afterlife to him, in a séance he is then given a stark warning: in a few months time, he will indeed learn what lies beyond death, but at great personal cost. For even as “science senselessly struggles to break the barrier which separates us from God,” one door will close just as another opens, in an irrevocable and fearful process. Meanwhile a mysterious stranger contacts Aldama’s estranged daughter Patricia (Mapita Cortes) and brings her to Mazali’s sanatorium where events will reach their climax in madness and tragedy…

After two successful vampire pictures, El Vampiro and El Ataud del Vampiro, made in just the previous year to this film, director Fernando Méndez next opted for this more ambitious project, a complicated and atmospheric zombie tale in which some have seen anticipations of much Mexican genre production due the following decade. The Black Pit Of Dr M (aka: Misterios de Ultratumba) can therefore be seen as the culmination of his short career in horror, as only the unsatisfactory western hybrid The Living Coffin (aka: El Grito de la Muerte, 1959) remained before Méndez worked on a couple of further, more nondescript, projects and retired from directing a couple of years later.

While some parts of Black Pit are hugely impressive – leading its effusive DVD commentary track to claim it as a neglected ‘masterpiece’, some of its strengths are arguably also its weakness. For instance the insistent, melodramatic tone, studio acting, or the conflation of several horror elements (zombies, apparitions, mad scientists, disfigured assistants, private asylums, etc) into one heterogeneous mixture that’s both daring and ultimately diffuse in effect.

Méndez’s black and white film looks splendid in this reincarnated edition, with excellent cinematography that includes deep focus, adding immeasurably to the Gothic atmosphere it inhabits. Dr Manzali’s mist swept, wet-paved hacienda for instance, containing the sanatorium, full of evocative visual pleasure and composition, or the Ulmer-like minimalism of the nightclub in which we first see Patricia. Add to this a splendidly sombre main theme by Gustav Carrion and fans are in for a treat. Such sustained sombreness is certainly streets ahead of the better-known, somewhat beloved, campy works of terror that were to follow shortly in the Mexican horror film, like The Brainiac (aka: El Baron del Terror, 1962). In fact the moody genre success of Mendez’s film makes it hard to see why the American distributors felt obliged to change the title at all, let alone quite what the black pit in the English language title is. Dr Mazali has nothing like it on show, unless it is the metaphorical pit of madness into which he so dramatically plunges.

Combining the disparate elements of the plot into one convincing whole is, as already mentioned, one of the film’s biggest challenges. It’s not that the result is a failure, far from it. But as a scarred henchman, gauche lovers, Dracula-like caped figure, a madwoman, obsessed medic and all the trapping of a B-movie asylum come together on screen in turn, by the half way mark Méndez has to make a decision about progressing the plot out of these complications, and then to its crisis which is only in varying degrees completely successful. One wishes that he had made more of an earlier stylistic decision, which incidentally makes up one of the film’s finest moments: a startling jump cut from a close up of the terrified Patricia’s eyes directly to an impending confrontation within the madhouse. Elsewhere the narrative abruptly (presumably for reasons of timing and clarity) skips a whole three months and a murder trial before it takes up matters again in a death cell – a process done through more traditional editing which leaves the development of one major character meantime at least to be desired. But perhaps one should carp too much; nightmares after all have their own disorientating logic (and the DVD blurb does refer optimistically to ‘shocking jolts’), this while sacrificing some mundane events gives Méndez time to bring out some striking sequences: the eruption from the grave for instance, or those within the asylum.

CasaNegra can be congratulated on doing a fine job in bringing this Mexican horror classic safely to disc, one of a series of such releases. Not everything is perfect (viewers are warned about some ‘brassiness’ in the soundtrack sound, but it’s very minor especially compared to an unmentioned, persistent low hum heard throughout, presumably present in the original elements). The print, taken from vault materials, is admirably free from on screen damage or artifacts. Extras include an enthusiastic and welcome commentary by IVTV’s Frank Coleman, a photo essay ‘Mexican Monsters Invade the US’, a director’s biography, the original 1961 continuity script, cast bios, poster and stills gallery with the original trailer.

All in all this is indispensable viewing for those who enjoy their horror in black and white, especially those who cherish the original 1930s’ Universal cycle, from which much on offer here owes strong inspiration. Those who have stumbled across Mexican cinema of this type will see this is one of the best examples and not hesitate others should check it out as soon as possible.