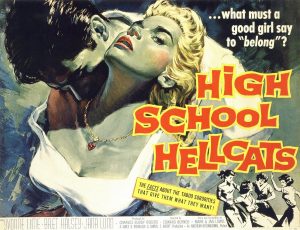 In every decade since the birth of film has their been a flick about the dangers (for teens) of behaving contrary to established rules? Yes, and “High School Hellcats” falls into that genre. Acceptance by one’s peers is a big motivator for teens and a good way to start off a film about one who is led astray. And who is in more need of acceptance than a kid who transfers into the area? (see “Rebel Without a Cause”)

Joyce (Yvonne Lime) is just such a girl. It’s easy for her to fall in with the wrong crowd. Before you know it, she’s wearing slacks! Even Shakespeare would tell you that such an act of effrontery must be followed by a fall.

One should not expect too much from this 50s drive-in fare, and not much is what the viewer gets. The direction has characters behaving in nonsensical ways. Clichés abound. And, the supposedly climactic ending turns out to be an in-film product placement for the phone company, who wants to sell more extension phone lines. Well, you must admit–extensions certainly do make it easier for two people to listen in on the same conversation.

This film is most enjoyed if the viewer can appreciate its camp.