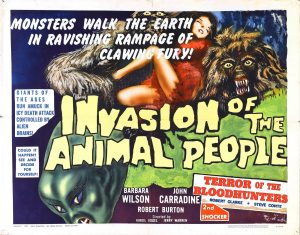 This was a 1959 Swedish/American co-production. In the Lappland of Sweden a meteor crashes. Turns out it’s not a meteor–it’s a spaceship from another world. For no given reason–a huge, hairy monster comes from the spaceship, walks around, causes destruction and kidnaps a woman who has come with a team of scientists to explore the “meteor”. Can anything stop this monster?

And what does it want?

There are lots of things wrong with this film–it has a romantic title song (for a SF feature!!!!); it opens with hysterically lousy special effects showing the spaceship landing; the monster doesn’t show up until 50 minutes in (the film is only 70 minutes long); endless skiing footage; lousy acting (particularly Babara Wilson); laughable lapses in logic (note how conveniently Wilson’s busted ankle is ignored). Also there’s a pointless and fairly explicit nude shower scene which has no bearing whatsoever with the story! Still, it has an intelligent script; it’s well-directed; takes place in a most unusual setting; has a very scary-looking monster and moves pretty quick. No classic but interesting.

It came to American in 1962. For some reason producer Jerry Warren destroyed it. He changed the title to “Invasion of the Animal People” (?????) and added John Carradine to the cast (probably for marquee value). Carradine opens up the film with the most insipid speech I’ve ever heard (it makes next to no sense) and narrates portions of it. Warren added dreadful new footage (badly shot and acted) which added nothing to the story; gave it a really silly new opening (involving Wilson); says it takes place in Switzerland (????); rearranged footage and cut out huge chunks. What is left is a hysterically bad, incomprehensible mess! I believe Carradine later said this was one of his worst movies (he’s not kidding). It’s known as being a camp classic.

But now BOTH versions are available on DVD. It’s more than a little interesting to see how Warren totally destroyed a fairly good movie. It’s a good thing the original is now available for people to view. “Invasion” gets a 1 (I wish I could give it a zero) but “Terror” gets a 7. Like I said, no classic but pretty well-done…and how many monster movies do you know that were made in Sweden?