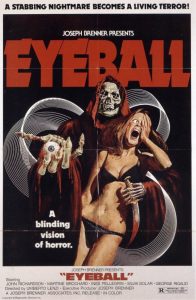 Umberto Lenzi doubtlessly is one of the greatest and most multi-talented Italian Cult directors, who has contributed gems to pretty much any genre and sub-genre Italian genre-cinema has brought forth, be it rough Poliziotteschi like “Milano Oida… La Polizia Non Può Sparare” (“Almost Human”, 1974), “Roma A Mano Armata” (“Rome Armed To The Teeth”, 1976) and “Napoli Violenta” (“Violent Naples”, 1976), stylish Gialli like “Sette Orchidee Macchiate Di Rosso” (“Seven Blood-Stained Orchids”, 1972) or “Spasmo” (1974), Gruesome Cannibal Films Like “Il Paese Del Sesso Selvaggio” (“Deep River Savages”, 1972), “Mangiati Vivi” (“Eaten Alive By The Cannibals”, 1980) or “Cannibal Ferox” (1981), and even Westerns, Spy Flicks, Sandal Films and Sword and Sorcery – there’s hardly been a genre Lenzi was not part of, and he delivered fantastic films in any of them.

While “Gatti Rossi in Un Labirinto Di Vetro” aka. “Eyeball” (1975) isn’t Lenzi’s best Giallo (“Seven Blood-Stained Orchids” is, without a doubt), it is still a highly entertaining film to watch. On a tour to Spain, a bunch of American tourists, among them several hot women, are targeted by a knife-wielding, red-caped Maniac, who kills his victims by stabbing them in the eye… This murder method alone is capable of making a film worthwhile, and since this one is by Umberto Lenzi, there is, of course, more. This one’s plot line may be less complicated and ingenious than the typical 70s Giallo, but Lenzi nonetheless delivers tons of entertainment. The film is sleazy and violent, the murders are gory and the female cast-members all seem to have exhibitionist tendencies. The mystery and suspense level are not particularly high, but Lenzi’s skillful directing still does ensure tension. Score and Cinematography are genre-typically cool, but not particularly memorable. Overall, “Eyeball” is doubtlessly one of Lenzi’s lesser films, but still a noteworthy and very entertaining little flick that is recommendable to all my fellow fans of this great Italian master.