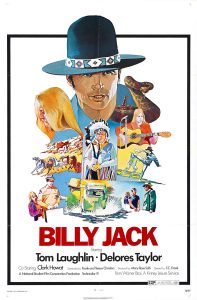 BILLY JACK came out during the absolute height of discontent about the Vietnam War. The sequel, out in 1974, was after the war officially ended. At this point, the thrill of the hippie movement had lost some of its appeal and the anti-establishment hero, Billy Jack, was passé. Plus, the sequel was terribly written and incredibly over the top when it came to sentiment and melodrama.

This film is itself a sequel to the film THE BORN LOSERS–a movie about an evil biker gang that terrorizes a small town. Now, instead of fighting evil bikers, our peace-loving hero (who always seems to spend half the movie beating the crap out of everyone) is defending the residents of a combination Indian school and hippie commune. In fact, it’s amazing that for a pacifist, Billy kicks the crap out of an awful lot of people. As far as the plot goes, it’s really predictable and the dialog is sometimes terrible, but if you’ve always wanted to see what it would be like to graft a Steven Segal movie onto a hippie flick, then this is YOUR film. All others should beware! It is chock full of hippie and faux American Indian mumbo-jumbo and is, alternatively, unintentionally funny AND poignant!