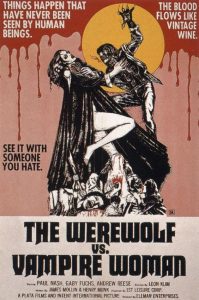 Noche de Walpurgis, Nacht der Vampire, Blood Moon, Werewolf Shadow … the amount of alternative titles that this movie has, annoying as it may be, is a testament to it’s international success.

So why is it that the world cared so much about some Spanish horror movie? Well, the fact is, it was simply better than most of what everyone else was doing at the time. But like “I Was A Teenage Werewolf” did in the late fifties, this movie sparked off a whole new generation of similar werewolf movies such as “The Beast Must Die”, which attempted to emulate it’s atmosphere precisely.

But has it stood the test of time? Lead actor and writer Jacinto Molina certainly thinks so. Others are less certain. For instance, it’s easy to put off by the cheesy soundtrack, complete unsuited to what the mood of the movie should be, and the script definitely has it’s dull moments. There’s a whole sequence towards the end of the movie, when a policeman comes to investigate the murders and seems to spend half an hour in pointless conversation with the villagers. Oh, and the ‘romance’ aspect of the film feels both rushed and forced. The blood often looks fake, and the clearer the picture is, the less convinced you are by the makeup. It’s one of the few movies that fails to benefit from a restored DVD version.

However, there’s still plenty of good stuff here that help it to rise above the ‘trashy horror’ category for some parts at least. There’s only a small amount of nudity in the film, gratuitous though it may be, and the dialogue isn’t half as bad as most horror movies of this period. The historical sequences are surprisingly good, and the vampires are particularly creepy — thanks to Molina’s insistence that they should be filmed in slow motion. His performance is easily the most notable, and it’s likely that if he’d been given more creative control over the production of these movies, they would have been much better.

All in all, this movie may well be for genre fans only. Most will probably find it dull and dated, but at the time it was definitely something pretty special.