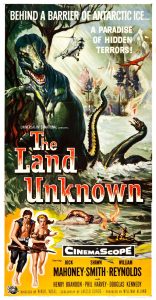 A rip-roaring sci-fi adventure that has quite a lot going for it: a novel premise, a square-jawed hero, a lovely blond heroine, and several dinosaurs presented in a bizarre landscape.

Universal’s ace effects artist Clifford Stine did a terrific job. The sets are also remarkable. The film’s explanation for the presences of a tropical prehistoric world in the frozen Antarctic is intelligent and plausible. The character don’t act like stereo-types, so the plot avoids being predictable. Be kind when you view the dinosaurs; they serve the story well, despite the fact that they’re puppets, men in suits, and enlarged lizards.

If at all possible, see the wide-screen version. There’s nothing worse than watching a dinosaur’s mid-section attack somebody off-screen because the dino’s head and tail have been cut