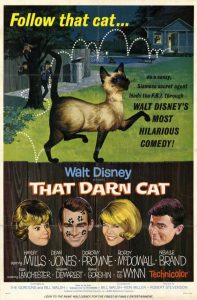 “That Darn Cat!” can be considered the first in the series of human/animal buddy caper films (see “K9”, “Turner and Hooch”, “Oh Heavenly Dog” to name a few). And it’s also one of the funniest.

D.C. is a clever and precocious Siamese who is forever getting into mischief, but who forever remains one of filmdom’s coolest cats. But when D.C. (for “Darn Cat” – though D.C. is also an acronym for something unspeakable in a Disney Film!) becomes an unsuspecting witness to a bank robbery/kidnapping, he finds himself the FBI’s most valued informant.

The cast of this of this cool Disney caper is sophisticated, intelligent and frequently hilarious. Hayley Mills, as D.C.’s overly-zealous owner, has finally graduated to womanhood, while still maintaining the girlish charm that captured the hearts of Pollyan-ites and Parent Trappers everywhere. Her lines of dialog are extensive, and though her voice begins to grate after a while, she is both smart and quite ballsy for a teen of the early 70s. Dean Jones as unflappable FBI Agent Kelso manages to display a dignity, wit and charm not usually present in the straight man of a Disney Comedy (Who else would remain calm as the little beast nearly tears him to shreds, covers him with ink, and leads him on three separate chases in pursuit of the elusive wild goose?).

Bad guys Neville Brand and Frank “The Riddler” Gorshin simply ooze evil when they are coolly discussing the potential fate of hostage Grayson Hall. Even now as I watch this movie, I really BELIEVE they would do serious bodily harm to this poor woman, in much the same manner that Roddy McDowell (as a hot-headed and stuffy neighbor) would be willing to de-gut our hero, the cat.

And therein lies our focus – the cat. This brave little feline is the true (and UNBILLED!) hero of the piece. And D.C. clearly is capable of holding his own against overwhelming odds. Even with star talent surrounding at every turn, the writers were smart enough to keep the focus on D.C. and his antics. The assorted chases, the jealous boyfriend, the vengeful neighbor (with his duck dinner clutched firmly in hand), the bickering couple next-door; all revolve around or are in some fashion related to, the actions of the furry little sleuth.

The writing is fun; speaking on a heretofore unseen level of intelligence to its young audience. The result is that children are entertained and clearly understand what’s going on, while grownups marvel at the complex doings in a small town that are precipitated by one mischievous kitty and the screwball humans that surround him.

This film is a whopping credit to Disney’s talented live-animal handlers and art direction teams. The sets and scenery in this delightful little any-town are realistic enough to make you believe they are a real community, yet spritely and colorful enough to make you want to move there… The drive-in movie theater scene still gives me a good laugh.

In all, “That Darn Cat!” is a delight to view on multiple levels, whether you’re all alone, or in a room full of pre-schoolers. For an extra treat, pick up any CD by Disney that has the film’s title track by Bobby Darin. The cool loungey tune rings vaguely of Harry Connick Jr. and would probably be right at home coming out of the pipes of Ol’ Blue Eyes, Mr. Sinatra, himself.