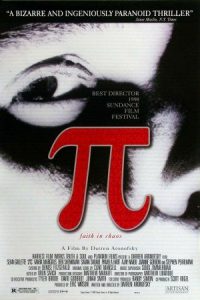 “Pi (1998)” is, without doubt, the best no-budget movie I’ve ever seen. Directed by Darren Aronofsky with a ridiculous budget of $60,000 – which I first thought was a mistake in the figures, since I couldn’t believe such a movie could possibly be made with that amount of money.

Most of the cast and crew later re-united to make “Requiem for a Dream (2000)” – one of the best movies made in the last few years. Like many others, it was “Requiem” that made me find “Pi”. It took Aronofsky only 2 movies to become one of my favorite directors, and I can’t wait to see what the future holds for this young and promising writer/director.

The movie stars Sean Gullette, which co-wrote the movie with Aronofsky and Eric Watson. You might recognize him as Arnold (Marion’s old partner and shrink) in “Requiem”. Gullette is perfect in his role and does an amazing job here. It’s a shame we don’t see his talent in more movies.

Mark Margolis (Mr. Rabinowitz in “Requiem”) is excellent as Max’s mentor and all the other cast is doing a great job too.

Like in “Requiem”, technical aspect is top-notch: Excellent black-and-white cinematography (Matthew Libatique) and the innovative use of the Snorricam, lightning, editing (Oren Sarch), and music (Clint Mansell, frontman for Pop will Eat itself).

The director’s commentary for this movie is fascinating. After hearing it you’d appreciate the effort and heart that were put into this movie a lot more.

Look for guest/cameo appearances by Samia Shoaib (the nurse in “Requiem”) as Devi, Max’s nextdoor neighbor; Clint Mansell (the movie’s composer) as the photographer; and Abraham Aronofsky (Darren’s father) as one of the men delivering the suitcase at the door.

One last word. While some aspects presented in the movie – such as the Hebrew numerology and mathematical concepts – are correct (that is, the explanations of Hebrew numerology are not made-up; That _doesn’t_ mean I actually believe in any of the meanings attached to them), I suggest you to use your suspension-of-disbelief instead of trying to find logic and mistakes in them.