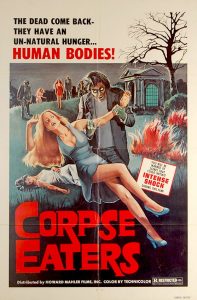 Producer Lawrence Zazelenchuk is the man behind this Canadian horror film, which was considered their first “gore” movie. In a pretty interesting story, the producer had two dreams in life. One was to own a drive-in, which he was able to do and the other was to make a movie to play there, which is this film. The story is pretty simple as four people stumble upon some zombies and chaos follows.

CORPSE EATERS was made for $36,000.00 and you can tell that the budget was that small. With that said, for the most part I thought it was a well-made picture with everything considered and it’s certainly lives up to its new reputation. I say new because this film hardly got released back in the day and it was pretty much forgotten until it was released to VHS back in 1993. I think fans of the Herschell Gordon Lewis gore films will certainly enjoy this.

As with the Gordon films, this was here screams drive-in because it has that low-budget atmosphere that can only happen when you’re shooting something without much money. The film also manages to be rather creative when it came to the kill scenes including one poor sucker who gets eaten and chopped apart at once. The gore scenes are certainly the highlight as some of them (like the autopsy) look rather cheesy but there are others that look excellent. The before mentioned scene where a person is eaten in gory details as well as chopped up looked extremely good and this was four years before DAWN OF THE DEAD.

The performances are bland to say the least and there’s no question that some better cinematography would have helped. I’d also argue that there’s very little to no story here and even at less than a hour the film drags in spots. Still, this is a pretty fascinating film with an interesting story behind it so zombie fans will certainly want to check it out.