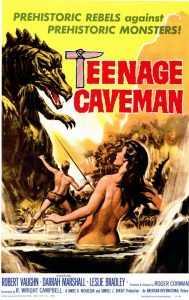 Teenage Caveman is an enjoyable Prehistoric adventure from Roger Corman and I taped this when BBC2 screened it during the early hours some years ago.

A young caveman goes against warnings and decides to explore the land beyond the river where his tribe live. There are plenty of dangers our there, including stock footage dinosaurs from One Million BC and Unknown Island, a pack of wild dogs and, best of all, a very strange looking “monster” that turns out to be a man in a radiation suit. We then learn that after a nuclear war, this part of the World went back to Prehistoric times.

Being made in the Atomic Age, this movie show was yet another theory what people thought could have happened in the event of any nuclear war. At the end, we also get to briefly see clips from other AIP movies including The She Creature.

The cast includes a young Robert Vaughn (The Man From UNCLE, The Magnificent Severn, Hustle) and sci-fi B movie regulars Jonathan Haze (Little Shop of Horrors, It Conquered the World), Ed Nelson (The Brain Eaters) and Robert Shayne (The Neanderthal Man, The Giant Claw).