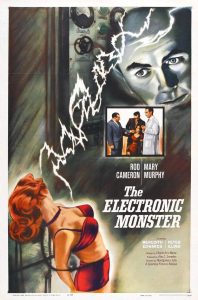 In Charles Eric Maine’s excellent (for its day) novel, a scientist invents a mind-tape-recorder (helmet on the head, bazillion-track tape), hoping to use it for Good, like studying mental disorders. A movie mogul gets hold of it and soon billions of people waste their lives and their savings in tanks “experiencing” recorded porn or schmaltz (ultraslow replay intensifies the sensations). The scientist decides to take drastic measures, batters the mogul to death and plays the recording to the billions, hoping to scare them back to reality. Instead they die and the book ends as he’s about to be sentenced for the death of the mogul, raising the ethical question of the collateral damage.

Bear in mind that when Maine wrote this, brain waves were novel, magnetic sound recording was only about a decade old and video recording was still in the future.

In the Z-grade film, the WHOLE story is ripped out (daren’t offend Hollywood) and we’re left with an ordinary quarter-inch reel-to-reel recorder and a squawking electronic soundtrack that has nothing to do with the action on screen. I’ve completely forgotten the new plot, but vaguely remember people in leotards writhing around some cheesy gauzes to hint at forbidden pleasures.