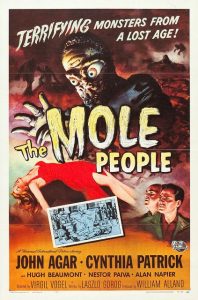 There is just enough ‘oomph’ to “Mole People” to mark it as a minor classic (50’s Universal B flick division). The idea of an lost ancient civilization sealed away from the modern world by time and catastrophe and buried far underground is a powerful one (dating back to the Greek Hades/River Styx days), and there are elements of interest in the exposition and the plot – a slave race of mutants, a decadent people so accustomed to the dark that a flashlight is a source of overpowering pain, a society that must limit its numbers due to the limited food supply and sacrifices its youngest (and heretics) to the mysterious power found in a mystery chamber.

Too bad this heady brew, which could have made for a powerful, disturbing experience in the hands of someone like Neil Gaiman or Alan Moore, was handled with the usual manner of an under-budgeted 50’s B flick. It’s not that the lead actors (Agar, Beaumont and Paiva) are so bad…well they ARE bad, but they are at the mercy of the script (which sinks the plot with indigestible wads of exposition) and direction (long dull sequences where nothing much happens and over-packed action sequences where nothing believable happens.) The actors do their best, but to no avail.

BTW, I can accept the idea that this lost civilization is declining and decadent, but judging by the fight sequences, their soldiers and enforcers have the muscle tone and fighting skills of prepubescent girls. This tends to undercut the dramatic value of the scenes where Agar and company make a break for freedom, or the revolt scenes where the mutant mole people finally rise up against their overlords. And someone needed to educate the film makers that “decadent” is not the same thing as “effete”.

In “Mole People”‘s favor: the first shot of the huge cavern our heroes emerge into is very nicely done indeed, one of the best matte effects of its day. The “surprise” twist which reveals the truth of the iconic symbol worshiped by the lost society and the sacrificial chamber is a nice little bit of writing. The cruelly ironic fate suffered by Agar’s love interest made me wince a bit (she deserved better). And a nice closing shot that writes “Finis” to the move wraps things up nicely.

Worth seeing once, if only for the historical interest. You just KNOW that a modern remake is being developed somewhere right now, but production values aside, it won’t have the classic factor this one does.