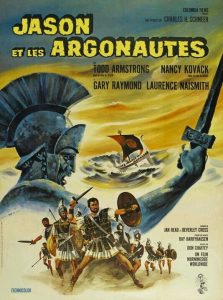 Fans of Ray Harryhausen’s stop motion animation process will have a field day with JASON AND THE ARGONAUTS, which Harryhausen considered his best work. And certainly Harryhausen’s special effects are the highlight of this film, which is generally based on the ancient Greek myth of Jason’s search for the golden fleece.

The film as a whole is very much like a superior sword-and-sandal epic of the 1950s and 1960s, very colorful and over-run with manly men and beautiful dancing girls. A bit slow to start, once the story line is established the pace leaps forward–and we are treated to some of Harryhausen’s most enjoyable creations, including Talos, the bronze statue; two of the most evil looking harpies you can imagine; a really nasty hydra; and Harryhausen’s most famous (and his own personal favorite) bit of work: an attack by skeleton warriors.

In the wake of computer generated graphics, Harryhausen’s work may strike some as dated, but this is actually part of its charm, for we will never see its like on screen again; it has a certain visual appeal not found in contemporary films, and Harryhausen’s creations always have remarkable personality. On the downside, however, some of the film’s other techniques have not aged as well, and the use of rearview projection is extremely noticeable (and often annoying) to the modern eye. Still, even those who aren’t overly enthusiastic about these types of special effects will find the film an excellent choice as a “family night” film. As for Harryhausen fans–the film is a must-see, must-own, and must-watch as often as possible!