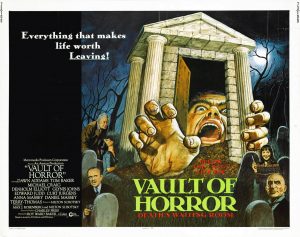 What more could you ask for? This movie shines with a brilliant line-up of actors playing up the script for all it’s worth. Directed by Roy Ward Baker, VoH oozes with direction and style (see his filmography). Fans of classic not-too-low-budget horror will appreciate this film, as will anyone with a lust for british films. And Hammer films.

To date, this is the ONLY multiple-story film I can watch more than once. Maybe it’s the era bleeding through the screen into my brain, bringing me back to a time when cgi didn’t exist and movies held their own magic without having super budgets spewed into them. Maybe it’s because Tom Baker, my all-time favourite Doctor, plays a rather scruffy-looking artist with a serious dark side. Maybe it’s the memorable soundtrack, oddly orchestral amid the tumult of intrusive moog soundtracks of the period.

As mentioned in another review, get the UNCUT version if you can. If there are kiddies about and you want to frighten them without the (very mild) gore found in most films of today, the edited version will do. It is near-impossible to find a commercial copy of this film in the states, but maybe Cinemax will run it again late at night? Please?