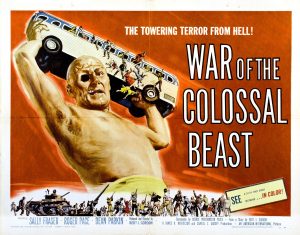 Even though this movie picks a less subtle approach than its predecessor “The Amazing Collosal Man”, this movie still works out as a rather good and enjoyable B-movie.

Basically there is even less story than the last time and the movies starts off were the first movie stopped. You can say that this movie is more of the same, since it doesn’t offer anything new really but its welcomed, since its basically some good entertainment. It’s definitely way better than your average B-monster movie attempt. It remains rather amusing to see a 60 feet man causing mayhem, no matter how simple and ridicules it sounds. Of course the movie gets rather ridicules at times, also with its characters and dialogs but what else could be expected from a movie like this.

The first movie still sort of picked a more emotional monster approach, in the same way as for instance was the case with classic monster movies such as “Frankenstein” and “The Wolf Man”. This movie still somewhat has a ‘realistic’ approach feeling over it but the emotional elements involving the main character are pretty much gone by now because of the reason that the condition of him has influenced his brain, as already was the case at the ending of the first movie, causing him to be more of a growling monster this time.

The movie is directed by the same director (Bert I. Gordon) of the first movie but yet the movie does not use the same actors. Sort of makes you wonder why, as if the actors from the first movie were classy actors who were in the position the make demands and ask for an high salary. It’s not a big issue though that the actors are different ones this time, even though its definitely true that the acting in this movie is worse than was the case in the first movie.

The special effects are just as effective looking as they already were in the first movie. Of course it doesn’t look like much special by todays standards but back in the ’50’s this must have really scared some people and must have been amazed by some of the movie its effects. Even now the movie still remains sort of somewhat scary at times because of the make-up effects and growls of the amazing colossal man, or beast as this movie its title calls him. It’s definitely more of an horror movie than the first movie was, that mainly picked a science-fiction approach.

It doesn’t feature as much action as the movie its title might suggest and actually when you compare this movie to the first one, you’ll see that both actually feature just as much action. This might be a disappointing aspect, since the movie its title obviously suggest some bigger, better action. Oh well, of course back in the ’50’s they just didn’t had a good idea yet of how to create an action filled summer blockbuster.

More of the same but therefor also just as good and watchable as the first movie.