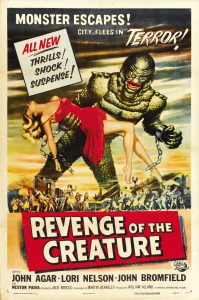 In all fairness this movie should be judged for what it is …. a 1950’s B Monster movie flick. I give it high marks in this area. It may not have the shock and scare value as it predecessor “The Creature of the Black Lagoon” but I find it to be a good representative of it’s genre. A lot of this film was shot at Marineland in Florida at a time before there ever was a Sea World. As a kid I was amazed at some of the scenes in the film such as “The Creature” over turning a car as he was escaping the Aqua Park, and jumping out of a huge aquatic tank to attack the audience. Recently I talked with Ricou Browning (who played “The Creature”) and determined that Universal Studios used wires to turn over the car that was supposedly thrown by the Creature. Wires were once again used to pull the Creature out of the large tank at Marineland as the Creature attacked actor, John Bromfeld. Seconds later he was attacking the Marineland crowd. As a young theater goer I found this fascinating. This film has been taking a lot of heat from some of your web site critics. I think it is well worth watching to see how the old Hollywood crowd use to scare us at the Drive-In. If nothing else it serves as a pleasant stroll down “memory lane”.