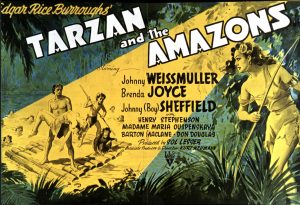 TARZAN AND THE AMAZONS (RKO Radio, 1945), directed by Kurt Neumann, the first theatrical “Tarzan” release since 1943’s TARZAN TRIUMPHS and TARZAN’S DESERT MYSTERY, and the third installment under Sol Lesser productions for RKO starring Johnny Weissmuller, brings forth some notable changes: Tarzan having a bigger waistline and sporting an upgraded larger sized loincloth, while Johnny Sheffield, not quite a teen idol yet, still the curly haired adolescent Boy of about 13 or 14, whose speaking voice no longer in a higher pitch of a child, coming close to the physical height of Weissmuller, sporting a darker colored but smaller sized loincloth. Most importantly, however, is the return of Tarzan’s mate/wife, Jane, formerly played by the redheaded Maureen O’Sullivan at MGM, now enacted by the blonde Brenda Joyce. With Joyce tackling over the part, Boy no longer addresses her as “Mother” but by her first name. After two previous entries bearing World War II related themes and invasion of Nazis, the series returns to basic formula of white hunters on a friendly mission to become dangerous intruders to the Tarzan family when greed of gold is concerned.

AMAZONS opens with Tarzan (Johnny Weissmuller), his son, Boy (Johnny Sheffield) and their pet chimpanzee, Cheetah, setting out to meet with Jane, who is scheduled to return home from her trip in England. While rafting down the river, Tarzan rescues a girl from a lion attack. An ankle injury has Tarzan return Athena (Shirley O’Hara), carries her back to the secret city of Amazon woman in Palmeria ruled by a middle-aged queen (Maria Ouspenskaya). As much as Tarzan is the only outsider to know of this kingdom, Boy, who disobeyed Tarzan by remaining behind, secretly observes at a distance. After the reunion with Jane (Brenda Joyce), accompanied by archaeologists, Sir Guy Henderson (Henry Stephenson), Bannister (Barton MacLane), Anders (Don Douglas), Splivers (J.M. Kerrigan) and McClour (Steven Geray), Boy becomes fascinated by these visitors, especially after witnessing items new to him such as a microscope and their stories of the outside civilized world. Cheetah, who earlier obtained an emblem dropped by Athena, presents it to Jane. Sir Guy finds the emblem belongs to a lost Amazon tribe and asks Tarzan for help in locating them. He refuses and orders them to go. Not wanting his new friends to leave, Boy escorts them to the civilization himself, leading to all sorts of trouble in the horizon for all.

Aside from the standard routines normally found in “Tarzan” films, the writers of TARZAN AND THE AMAZONS toss in some routinely situations found in family life. Tarzan and Boy have their one-on-one arguments as any father would have with his son. Sheffield’s Boy, who usually looks up to Tarzan in a hero worshiping sense, as would any little boy towards his father, show signs of adolescence by acting out his frustrations, questioning authority, namely Tarzan’s. For Boy, who has known no other existence except roaming around half-naked throughout the jungle, boredom has now taken its toll, causing Boy to have an attitude, especially when finding the archaeologists more interesting in comparison to Tarzan. Tarzan, believing that Boy will forget these men, invites him to go hunting as promised, but Boy stirs up trouble by saying he never wants to go hunting with him again. Tarzan’s frustration is sensed when breaking Boy’s hunting bow. While this doesn’t really make as strong a statement as father and son relationships are concerned, this does prove that these two characters are just like anyone else. In typical fashion when father and son are on non-speaking terms, it is usually the mother, Jane in this case, to come to Boy’s aide, and not taking sides. Boy, showing no signs of wanting to burst out singing, “Oh, My Papa,” can be just as stubborn than Tarzan. Tarzan believes Boy will eventually calm down and return home, unaware that he and the researchers are being held prisoners by the Amazons, never to be seen or heard from the outside world again.

What makes TARZAN AND THE AMAZONS worth viewing is the presence of famed Russian actress Maria Ouspenskaya playing the Amazon Queen. Short in size, slow in speech delivery, heavy accented, but no raving beauty to say the least, those familiar with her on screen personality normally feel her presence in any sort of motion picture. Henry Stephenson, who was earlier seen in TARZAN FINDS A SON, appears for the second and final time in the series, while Barton MacLane, most noted for his gangster roles or playing good tough guys in Warner Brothers crime dramas of the 1930s, makes an impressive villain in his first of two roles in the “Tarzan” series.

Light on action and long on dialog during its 76 minutes, TARZAN AND THE AMAZONS makes interesting character study and routine adventure for any juvenile crowd. TARZAN AND THE AMAZONS, along with the others in the series based on the characters created by Edgar Rice Burrough, at one time popular viewing on commercial television in mid-afternoon or after-midnight hours some decades ago, was resurrected on the American Movie Classics cable channel (1997-2001) and Turner Classic Movies (TCM premiere: June 4, 2011). Never distribute onto home video, it was put on DVD along with the other RKO Tarzans in 2009. Next chapter: TARZAN AND THE LEOPARD WOMAN (1946)(**)