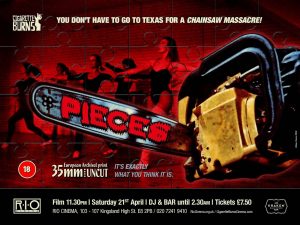 Thank you, Juan Piquer Simon! First I’m delighted by your wondrous “E.T.” rip off “Pod People”, then your amazing killer slug movie, the aptly titled “Slugs”. But now I’ve seen the one that tops those classics and then some: your take on the chainsaw massacre genre, “Pieces”. What an amazing, totally hilarious, totally entertaining movie!

After seeing a little kid hack up his mother with an ax (and the subsequent arrival of the police who have no reaction whatsoever to the woman’s severed head lying in a closet), we jump to “forty years later” at a college campus in Boston. We know it takes place in America, because there are American flags, maps of the United States, and pictures of Ronald Reagan everywhere. It’s obviously NOT Spain. Anyway, this totally-American-and-not-Spanish-at-all killer is on the loose, collecting various body parts for his human jigsaw puzzle. There’s tons of great gore as the unseen killer’s chainsaw rips through necks, arms, torsos, you name it. But what’s just as good is all the scenes between the gore scenes in which the cops try to hunt down the killer.

First of all, one of the cops is the guy from “Slugs” who yelled “You don’t have the authority to declare Happy Birthday!”. He gets an equally stupid line in this movie with “Right now we’re just buying clothes without labels and trying them on for size.” He enlists the help of Kendall, a well meaning student who is played by the guy who says “It stinks!” in “Pod People”.

Kendall is of no help at all except for the fact that he stumbles on the corpses minutes after the killer leaves the scene and he romances the tennis pro/cop who’s hunting the killer undercover. These scenes are creepy because the actress is old enough to be Kendall’s grandmother. Watch for the scene towards the end where she’s lying down and Kendall touches her face, then in the next shot he’s in the middle of the room, nowhere near her.

Also enjoy the fact that the cops find the killer’s bloody chainsaw, but he somehow magically has it back for the next killing. Enjoy the scene where a girl on a skateboard smashes through a mirror for no reason, and is never heard from again. Enjoy the scene where a character we’ve never seen before jumps out of the shadows, does some kung-fu moves, and then leaves, never to be seen again.

But most of all, enjoy the out-of-nowhere insanity of the film’s closing moments. I won’t spoil it here, but it has to be seen to be believed- actually, even then you might not believe it. “Pieces” is a totally enjoyable movie going experience if you are a fan of enjoyably bad movies and good gore.