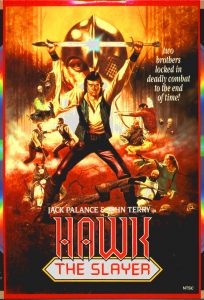 Yes, it’s time to travel back to the dying days of Lew Grade’s ITC Films, an age of darkness, of low-budgets and even lower-tech special effects, of bad acting and even worse writing: a world where clichés run rampant and Hawk the Slayer and his mindsword set the cause of sword-and-sorcery back several years. Shot almost entirely on a single Abbey set in Pinewood and the woods surrounding the studios in the heart of Autumn, this demented no-budget British spaghetti sword-opera – a sort of would-be A Fistful of Swords – pits John Terry’s virtuous hero against his evil one-eyed brother with a taste for Darth Vaderesque headgear Jack Palance after the latter kills their badly dubbed dad Ferdy Mayne in a squabble over “The power that is rightly mmmmiiiiiiinnnnnnneee!” That power being a magical mindsword with a glowing green handle that can fall into your hand if you think about it (and run the film backwards).

Mind you, as flashbacks later reveal, the evil Darth Voltan (okay, he’s not really called Darth) has already killed the love of Hawk’s life, something which almost shocks one-time Felix Leiter (in The Living Daylights) John Terry into changing his expression, before moving on to underline what a bad egg he is by kidnapping guest star Annette Crosbie’s Mother Superior, prompting Hawk into action. Well, not exactly action, more riding around the same stretch of woodlands while ineffectually ripping off The Magnificent Seven and A Fistful of Dollars (you half expect John Terry to say “My pony don’t like Begin’ laughed at.”) as he assembles his A-Team – a giant played by Carry On veteran Bernard Bresslaw, an elfin bowman who talks like a constipated Dalek, a not particularly short dwarf and Patricia Quinn’s witch with a particularly naff line in sorcery involving, er, smokey eggs. But then it’s pretty obvious that the budget didn’t really stretch to much in the way of even the cheapest special effects, with those there are largely of the stopping-the-camera-and-starting-it-again after-the-actors-have-left-the-frame variety, alongside a magic neon hula-hoop left over from some disco movie, a pair of Spock ears from a novelty shop and, in one memorable killing, silly string (or as the DVD chapter stop calls it ‘The silly string of death’). And my, didn’t they get a good deal on the fog machine that week!

Long shots also seem a bit of an alien concept for director Terry Marcel, who cut his teeth as a third assistant director on Carry On Cleo and never seems to have scaled those lofty peaks again. Most of the film is played in medium shot to cut down on the number of actors required and to hide the fact the set isn’t that big – or perhaps just out of the fear that if they move the camera too far back, the actors will take the opportunity to run away before they have to deliver lines like “My son Drogo speaks true!” “Even as we speak, the wizards gather in the south” or serial overactor Shane Briant’s immortal “I am no messenger. But I will give you a message. The message of DEATH!”

Jack Palance doesn’t get much good dialogue either, but chews on what he gets for more than it’s worth anyway – he’s the only actor who could make the word “Wiiiiizzzzzaaaaaahhhrrrrrrdddddd!!!!!” last almost as long as Hamlet’s soliloquy, so it’s a shock to see how relaxed and, well, normal he looks in the raw onset interviews on the UK DVD (where he expresses far more admiration for Dinsdale Landen than Elia Kazan). Although even he might have balked at Bernard Bresslaw’s defiant “I’d sooner eat cowdung.” (Met with the inevitable response “That can be arranged, and you can wash it down with your own blood if need be.”) Indeed, when Hawk addresses Patricia Quinn as “Woman” – as in “Woman, we need the use of your magic” – you half expect her to reply “I’m a man. I’m not old, I’m 37. What I object to is you automatically treat me like an inferior. Oh, Slayer eh? Very nice. And how’d you get that, eh? By exploiting the workers. By hanging on to outdated imperialist dogma which perpetuates the economic and social differences in our society. Just because some dying character actor lobs a mindsword at you is no basis for a system of government.”

Sadly much of the film is more dull than unintentionally funny: writer-producers Marcel and Harry Robertson clearly intended this, you know, for kids, so it’s a bloodless school panto affair for much of the running time, visually bland and lethargic even at a modest hour-and-a-half. How they expected to stretch it out to a series of five movies is anyone’s guess (the film ended up as the supporting feature to Saturn Three). Still, on the plus side former pop star and Hammer and Children’s’ Film Foundation regular composer Harry Robertson (who wrote the superb Hammer Transylvanian Western score for Twins of Evil as Harry Robinson – it really is outstandingly good) turns in a score that’s like a demented disco combination of an Ennio Morricone paella Western and Jeff Wayne’s War of the Worlds, and the film is nowhere near as soul-destroyingly awful as Marcel and Robertson’s subsequent collaboration seven years later, the almost unwatchable-even-at-gunpoint Jane and the Lost City.