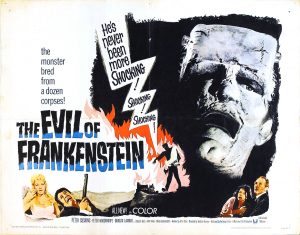 Having been exiled from Karlstaad, and with their creature gunned down on a mountaintop, The Evil Of Frankenstein opens with a now skint Baron (Cushing) and his apprentice Hans (Elès) moping around the forests like a Gothic Steptoe and Son, half-heartedly yanking the odd corpse out of huts, before being sent packing by another set of disgusted locals. The Baron has no choice but to creep back into town and retrieve his equipment to flog it off. To add insult, Castle Frankenstein has been looted and defaced with noosed effigies. “Why can’t they leave me alone?” sighs Victor. It’s all a bit much.

To cheer themselves up, the pair attend a travelling carnival disguised in facemasks like Batman and Robin. Victor spots a familiar face in the crowd: “Well, well, well, my old friend the Burgomaster. Now he’s chief of police. Easy to see how he got his promotion!” And he’s wearing the Baron’s ring. Not only that, he’s now in possession of Victor’s clothes, his chairs, his desk – “Even my bed!” Frankly, the pair need a positive: as luck has it, a deaf and dumb Björk look-alike leads them to a cave, where they discover the perfectly preserved body of the creature in a glacier.

Like Vernon Kay, “he’s alive, but his brain is dormant,” the result of being shot in the head in the previous film. The Baron hires the carnival’s dodgy mesmerist Zoltán (Woodthorpe) to try to bring it out of its coma. Like some faithless pet cat who decides it’s getting tastier treats from the old lady next door, the creature ignores the Baron, and will now only take orders from Zoltán. However, the bequiffed ageing wideboy has his own plans for the screeching lunk. “There are people in this village I want punished,” he huffs. Not being up to speed with the finer points of semantics, the monster stomps off in its corrective boots to rip the Burgomaster a new one. Job done, it returns home, gets drunk, screeches a bit more, and goes for a lie down. Yet despite giving him life, the monster in no way considers the Baron his besht fuggin’ mate. Then, as if suddenly collapsing under the weight of its own misery, the film ends very abruptly.

Directed by cameraman Freddie Francis, after Hammer’s Terence Fisher bailed out following a car accident, The Evil Of Frankenstein is generally regarded by horror buffs to be the series’ nadir, in part owing to the monster’s laughable visage, which resembles a man wearing a rotting box of cornflakes on his head. (Ironic, given that this incarnation’s appearance was made possible by the film’s distributor Universal relaxing their copyright on Jack Pierce’s flat-headed design for Boris Karloff.) But mostly, because it treats the continuity laid down by the previous movie with the same kind of respect the Baron has for dead people.

In The Revenge Of Frankenstein, the Baron had succeeded in creating a reasonably human-looking monster, before it was shot; was himself beaten to death by an angry mob for his groundbreaking contribution to genetics; and was then privately resurrected by his apprentice Hans. Here, there’s no mention of the Baron’s life-and-death experience; the creature (the delightfully named Kiwi Kingston) looks nothing like its forebear; and Hans appears to have downsized his IQ in the interim. The locals have also apparently forgotten they’ve actually killed him and instead merely run him out of Karlstaad on a rail. It’s the Sliding Doors of horror threequels.

Despite this wild shift in text and focus (a consequence of Hammer producer Tony Hinds replacing the usual Frankenstein writer Jimmy Sangster), The Evil Of Frankenstein is quite fun in its doggedly depressing way, and for a film made in 1964, surprisingly modern; this is practically a punk movie, with its nihilistic tone, a monster that elicits not the slightest shred of sympathy, and tombstone humour at odds with the melodramatic origins. “Cut out his heart?” gasps the Baron’s hired grave robber. “Why not?” comes the reply. “He has no further use for it.” For a relatively bloodless series, the violence (check out the scene where the foul creature attacks and kills the Burgomaster in his own bedroom) is certainly more than you’d expect from this era of Hammer, and indeed certain scenes were replaced or re-shot for its 1968 television showing. And as you’d imagine, with the award-winning Freddie Francis directing proceedings, the cinematography is first rate. Really, it’s a one-off, standing quite apart from the cycle, and none the worse for it.