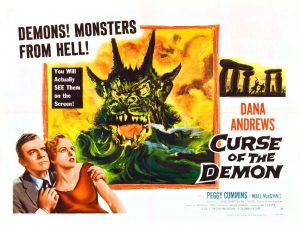 “Curse of the Demon” (aka “Night of the Demon”) is one of those weird little lost films that everyone agrees is wonderful and yet very few people seem to have actually seen. This is one of those rare British movies that is set, not in the city, but rather in the chilly, fog-choked countryside where little seems to have changed since Stonehenge was built. Niall McGinnis holds sway here as the impish leader of a Satanic cult, who swiftly dispatches of his critics by summoning a huge, horrific demon to rip them to shreds.

Into this isolated world walks psychologist John Holden, played by yet another seriously underrated actor, Dana Andrews. Andrews, who made a name for himself playing tough guys in films like “Laura” and “The Best Years of Our Lives” is wonderful here as the skeptical, even slightly smarmy, American who absolutely refuses to believe in demons, even when strange, unexplainable things begin to happen to him. Peggy Cummins is his love interest, the open minded schoolteacher whose uncle may have been a victim of the Demon. Niall McGinnis is disturbingly likable as the head of the Demon Cult, chucking aside a chance to play Aleister Crowley and opting for Benny Hill instead. He is very disarming as the films central villain, and Andrews confusion mirrors our own as the movie stalks relentlessly through a seance, a stormy Halloween party and a frightening hypnosis session to its surprisingly violent conclusion.

This movie is, by turns, sarcastically funny, suffocatingly tense and shockingly scary. The demon looks a little corny nowadays, and was revealed much too quickly with no suspenseful build-up, but the movie is so smart, so moody, so creepy and well done with an excellent cast to boot, that one can easily forgive the demon, which looks a lot like a slightly deformed bear with a pig nose and goat horns.

This is an excellent adaption of the short story “Casting the Runes” by M. R. James and still has the power to scare even 50 years later. Highly recommended!