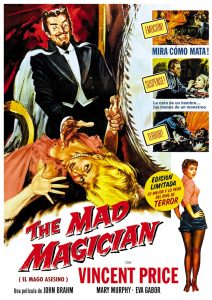 3-D was the hot thing in 1953. After “Bwana Devil” showed the potential of the format, all the major studios wanted in. Columbia managed to rush “Man in the Dark” out first, but the big landmark hit of the era was Warner’s “House of Wax”.

What do you do if you want a hit after that? How about you get the writer, cinematographer, and the star back together to do another one? When that star is the inimitable Vincent Price, it’s certainly worth a shot.

In “The Mad Magician”, Price plays a creator of stage illusions frustrated by the fame and success of lesser magicians who use his work. He tries to mount his own stage production but is stopped by legal action from his biggest client. So he quits the stage and goes back to slaving in the lab right?

No, of course not. This is Vincent Freaking Price. Instead he begins a murder and impersonation spree to cover up his string of murders and impersonations. Can state-of-the-art Victorian forensics stop him?

Comparisons to “House of Wax” are inevitable. The story’s probably more interesting, but the the black and white here pales nect to the wonderful colors of “House of Wax”. Both movies are relatively subdued in their use of 3-D and both use it to depict the art of the lead character and stage the action in a volume beyond the screen.

The big improvement here is that the movie isn’t a remake of another good film. The only reasons to watch “House of Wax” may be Vincent Price and 3-D. Here you get both of those in a new movie.

(“The Mad Magician” is available in 3-D on BD3D from Twilight Time and on Sony’s PlayStation Video Store.)