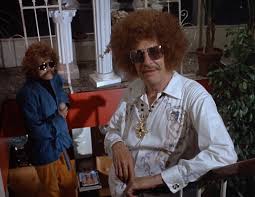 A prententious stage actor who only performs the works of Shakespeare kills himself after losing a critics’ choice award. Now, years later, the critics who shamed him are being killed in elaborate recreations of the Bard’s death scenes.

Sound like fun? Now imagine Vincent Price as that actor- and Diana Rigg as his daughter. That’s “Theatre of Blood”, a wonderful, bloody, feature reminiscent of Hammer films and Price’s entire body of work.

Or maybe it’s just a remake of Phibes with Shakespeare mixed in.

If you’re familiar with Shakespeare, you’ll immediately be thinking of scenes you want to see. A lot of the best ones do, in fact, come to pass. If you’re not up on the material, this will give you an overview of just how twisted some of these scenes can get.

Murder, disguises, accents, lessons in Shakespeare, critiques of critics, and Price hamming it up? If that’s not your idea of a good time, you’ve come to the wrong web site.

If you lament that the third Phibes film never came to be, try this as a substitute. It’s got the same deliciously wicked flavor.