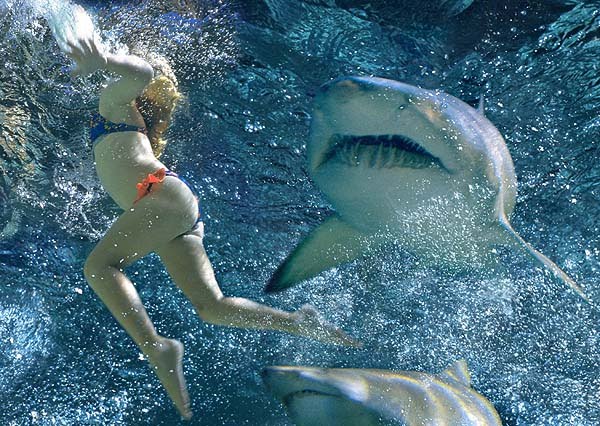 When a studio refuses to screen a film for critics in advance, it usually means one thing: the movie’s terrible. That’s okay, though; there’s often nothing more fun than watching trashy action. But the one crime a B-movie should never commit is boring its audience. By even these low standards, “Shark Night 3D” is dead in the water.

Unlike David Ellis’s previous forays into the genre, like “Final Destination 2” and “Snakes on a Plane,” there’s no sense of self-awareness, no humor and barely any “gotcha” moments.

What we get instead is a joyless trudge towards eliminating a bunch of attractive college students (including Joel David Moore, Dustin Milligan and “American Idol”‘s Katharine McPhee). Sara (Sara Paxton) has brought her Tulane friends to her family vacation house, on a giant lake that is inexplicably deserted. But this does make it easier for the two local psychos (Chris Carmack and Joshua Leonard) to release some toothy monsters into the water, in order to create their own, hillbilly version of “Shark Week.”

When the first victim (Sinqua Walls) has an unpleasant encounter while water-skiing, the others have to venture back out on the lake, to find the sheriff (Donal Logue) and get help. You can imagine how that goes.

With the exception of an utterly blank Paxton, Ellis has assembled a better-than-average cast for this kind of thing. Carmack, Leonard and Logue, in particular, are ready to chew more scenery than their aquatic costars. So it’s especially frustrating that screenwriters Will Hayes and Jesse Studenberg give them almost nothing to work with. And frankly, it seems like even Ellis gave up early: the interpersonal scenes are unmemorable, the visuals inept and the action inert. As for those poorly-shot sharks, let’s just say you’ll have no qualms about hitting the beach this weekend.

If you’re expecting a “Piranha”-type goof, or “Jaws”-style jolts, forget it. With the exception of one amusing rant from Logue, there’s nothing funny, or scary, or even stupid enough to enjoy here. Really, the most defining trait of this movie is that it’s obscenely expensive.

A perfect example of how Hollywood is trying to rip you off with 3D ticket prices, “SN3D” has exactly two cool scenes, each of which lasts about two seconds. So instead of wasting $17, wait for this one to hit DVD bargain bins. It shouldn’t take long.

Magic Moment: Who knew sharks could jump so high?

From The New York Daily News