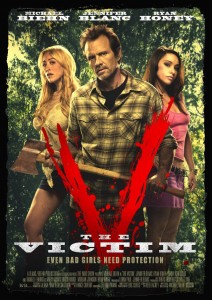 Michael BiehnS aturday at the International Horror and Science Fiction Film Festival was cult horror movie showcase time with a slew of well known genre actors and directors adding to the fun. Low budget independent B-movies were the focus in a batch of films featuring battling beasts, buckets of blood and bountiful bare breasts.

Michael Biehn (pictured), best known for his leading roles in many James Cameron films (The Terminator, Aliens, The Abyss), was on hand to introduce The Victim, his first effort as a Director. Mr. Biehn, as well as the film’s lead actress and producer Jennifer Blanc and many other members of the production, stayed around after the film screening to answer fan questions.

Biehn wrote, directed and stars in The Victim and he was inspired to make the movie during the filming of the Robert Rodriguez feature Planet Terror, which was part of the Grindhouse double-feature film of 2007. Biehn decided he wanted to try his hand at this genre and was successful in creating what he calls a “cotton-candy” film that shouldn’t be taken too seriously.

The Victim is about a stripper (Blanc) who is partying in the woods with her girlfriend and some bad cops when her friend is murdered by one of the officers. She escapes into the woods and comes across Kyle (Biehn with a name referencing his Terminator film character) who lives as a hermit alone in his forest cabin. The outcast loner protects the girl and battle ensues with the two rogue cops.

Biehn lived in Arizona for some time and has many connections in the state. He escaped the heat of the Los Angeles valley to film his movie in Flagstaff and locals will probably recognize the area. The Victim cast members who were on hand Saturday evening praised Michael’s first directorial effort and the man certainly has affection for the people on his team, showing them all in action at work while the film’s credits roll. The Victim will screen again at the IHSFFF on Monday, April 2, 9:20 p.m.

Saturday also showcased Monster Brawl which is a cross between a live action Street-Fighter style game and a Wrestling World Championship competition that pits infamous monsters including Frankenstein, Zombie, Witch, Cyclops, Werewolf and more in a battle to the death. This was a very cool concept that has its moments, but overall seemed kind of anti-climatic and missing a spark. The creators should have considered adding crowds to cheer on their favorite monsters and add some excitement to the competition.

I also took in Beyond the Black Rainbow on Saturday and although I usually enjoy films with obscure symbolism like this, where it is imperative to engage your brain in order to determine what the movie is actually about, this one really lost me. If you dig David Lynch and can handle 110 minutes worth of incessant electronic humming, then you might want to check this one out. I’m interested to hear your theories about it’s plot as well.

Another fun feature on Saturday was the screening of Slumber Party Slaughter that was attended by stars Tom Sizemore, Michael Bowen and director, writer and star Rebekah Chaney (pictured). The film has a group of strippers that inadvertently kill a movie star (Sizemore) who has invited them to a private party. The girls cover up the killing, but a year later a masked killer shows up to wreak havoc on a party they are holding in a wealthy voyeur’s mansion. If exploding breasts sound exciting, then you definitely don’t want to miss this one.

The beautiful Rebekah Chaney was very personable and intelligent and took fan questions after the screening. She is related to the late horror icons Lon Chaney and Lon Chaney Jr., and she seemed excited to be continuing the family’s horror film lineage. Mr. Sizemore seemed nervous and a little uncomfortable with the movie, both on-screen (in a role where he basically plays himself) and in-person, but he was gracious with fans and was seen signing autographs and talking to moviegoers in front of the theater after the show. Slumber Party Slaughter will screen again on Wednesday, April 4, 9:10 p.m.

I saw a slew of short films on Saturday including an enormous selection that was created by local filmmakers. Some of the highlights include:

Cult Status – A young man finds himself on an unusual date with a goofy girl and her family of cult members. A quick quirky and fun comedy created by Kevin Herrmann.

Parallax – This short is set in the Iraq war and addresses issues of prejudice and human nature. How did an Arizona film get made in Iraq? It didn’t. The whole thing was done locally in director Paul DeNigris’ backyard set and through the magic of CGI. Amazing.

Awesome Guy: A New Identity – This was a fun piece directed by Bob Marquis about a superhero and his sidekick that get laid off but move on to follow their not-so-grandiose dreams, proving that superpowers don’t necessarily make you happy.

The Phoenix Film Festival and International Horror and Science Fiction Film Festival continues on through April 5th. One of the highlights for Sunday’s show will be With Great Power: The Stan Lee Story, a documentary on the life of Stan Lee that will run in conjunction with the Phoenix Comic Con preview that will be held in the PFF Party Pavillion starting at 11 a.m.