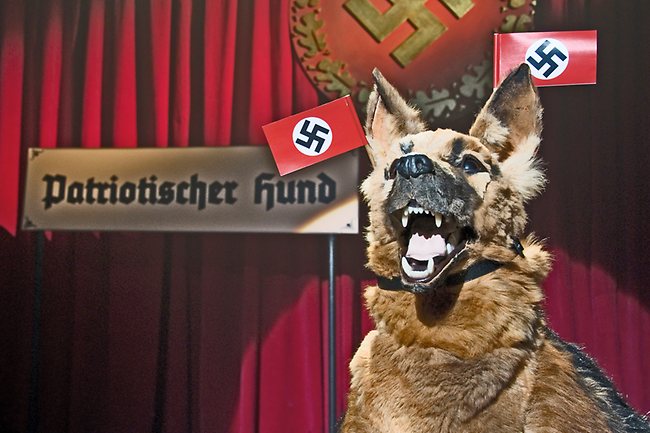 HITLER’S plan has been foiled again. His mutant lizard soldiers lie dead all around him. The Danger 5 team have him in their sights, but as they raise their guns, the villain escapes by throwing himself through a window.

A week later though, and Hitler is back with a vengeance.

This time the Danger 5 squad have to battle through his Moroccan pleasure palace to uncover his scheme to craft deadly super guns made from pure gold. The next week, they’ll be up against Kill-Men of the Rising Sun, or storming Hitler’s sex kitchen.

From the first moments it’s pretty clear that this latest Australian TV series is no Packed To The Rafters.

It’s Danger 5, and the people who like it quickly learn to love it. And thanks to YouTube, it’s not just the SBS audience tuning in at 9.30pm on Monday nights.

On the phone from Adelaide, co-creator Dario Russo says: “People all over the world want copies of the DVD, which, of course, is only available in Australia at the moment.”

All this, from what started as Russo’s final-year 16mm project at Flinders University.

Russo and his friend David Ashby made a short film called Italian Spiderman, with Ashby playing the title character.

It purported to be a trailer for a 60s Italian Eurotrash film, the kind you sometimes see on TV in the small hours of the morning – badly dubbed, melodramatically acted and shot on wobbly sets with lurid lighting.

Italian Spiderman was partially a parody of Mario Bava’s 1968 film Danger: Diabolik, and it had the kind of bad fight scenes and ridiculous amounts of gun violence which a generation reared on cheesy TV thrillers took to its heart.

“It went cult viral,” Ashby told news.com.au, “and on the strength of that, Dario went to the South Australian Film Corporation and we acquired a small investment, $9500, to expand this non-existent movie into a web-series, to move it into an existing movie.”

It wasn’t too long before SBS came calling, but legal problems intervened and eventually, Italian Spiderman was no more. The team set out to write a replacement – Danger 5 was the result.

If you haven’t seen it yet, Danger 5 is probably easiest to describe as the sum of its influences: 60s B-movies, according to Dario Russo.

But David Ashby adds that the show’s biggest influence was a particular kind of artwork from a typical kind of 60s and 70s magazine story about “some buxom dude saving some buxom babe from a Nazi with a monocle and a hook for a hand”.

“They have this 60s sensibility: it’s World War II, but the girls all look like they’re in the 60s,” he says.

“They have the eyes, the hair-dos, even conical bras. It was this really weird hybrid that really took our eye.”

The influences don’t stop there.

The result was a series of six half-hour programmes, set during World War II, in which the Danger 5 team – three men and two women of in Thunderbirds-influenced uniforms – do battle in increasingly surrealistic ways with the Nazis.

Hitler, played by Dario Russo’s father Carmine, makes regular appearances. Each episode ends with Der Führer fleeing the Five by jumping out of a high window.

Although Hitler’s jump was done by legendary Australian stuntman Grant Page, it’s basically the same shot at the end of every show.

“We only had the time and money to smash three windows on that particular night,” Russo says, adding that only two of the three shots worked.

“It’s funny in a film nerd way as well – continuity is non-existent in our show. We flipped the shot in the fourth and fifth episode, so the swastika changes arms.”

“But we’d always planned for it to be the exact same shot every time,” Russo says, “because the gag is the repetition of the fact that Hitler escapes by the same means at the end of every episode.

“It’s a Scooby-Doo moment, really. Those crazy kids have foiled his plan, again.”

Unusually, Danger 5 is a comedy that doesn’t rely particularly on gags and punchlines.

Ashby sums it up. “It’s Hitler smelting golden guns that shoot lasers at a casino in Morocco,” he says.

“We don’t need ‘jokey’ jokes. That’s not necessarily what we’re aiming for.

“The show’s set in World War II in the 60s. It’s ridiculously silly, why do we need to put more jokes on top of that?”

Adding to the hilarity is the fact the makers of Danger 5 aren’t interested in using computer-generated imagery (CGI).

They love the look of a toy helicopter, for instance, swooping in to lift an entire miniature railway carriage off the track to kidnap its occupants.

“People can tell if something on TV or in film is CG,” Ashby says.

“Somebody who isn’t even into film, they can tell. ‘That’s computer-generated.’ We’d rather take the time and care to make a physical object.”

Word of mouth has helped build a tremendous audience for Danger 5, but its makers are really just relieved that anyone’s watching at all.

Ashby says their best moment came after the first episode, when Shaun Micallef sent them an email.

“The one person in the whole of Australia who we would want to see Danger 5 is Shaun Micallef,” he says

“He emails us out of the blue. ‘Holy s***!’ Did we put some cheat code in?How does this work! This is amazing, Shaun Micallef is emailing us!”

“Of course there’s been some negative comments, but it doesn’t make a difference really.

“The biggest thing that we like, out of the whole process, is being able to come up and make the show.