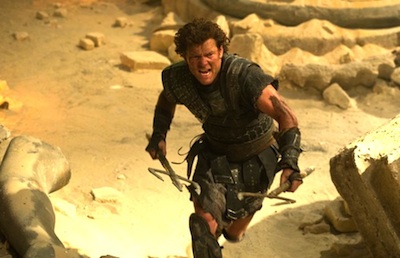 I come to praise Sword & Sandal movies — not to bury them.

But with Wrath of the Titans and the Sword & Sandal/sci-fi mash-up John Carter not exactly setting the world on fire — along with recent disappointments like Immortals and Conan — it’s getting more difficult by the day to believe that the Sword & Sandal movie can survive the recent fumbling of this otherwise great genre.

So for the uninitiated, what exactly is a Sword & Sandal movie?

Like its cousin the Biblical epic, a Sword & Sandal movie — or ‘peplum,’ named after a type of ancient Greek garment — is typically set in the ancient Mediterranean world, and dramatizes the fight for freedom. Think of Kirk Douglas fighting to free slaves in Spartacus.

The hero of a Sword & Sandal movie (see Sam Worthington above, in Wrath of the Titans) is usually muscle-bound (think Steve Reeves) and able to deliver passionate speeches about freedom (think Charlton Heston). The villain is normally a wicked tyrant, preferably played by a silky British actor (think Christopher Plummer) — and the hero typically has a few slave girls, wicked queens or curvy sorceresses thrown his way before he settles down with his true love, often played by an Italian brunette (think Sophia Loren).

From as far back as 1914’s Italian epic Cabiria — the first movie ever screened at the White House — Sword & Sandal movies have been delivering huge entertainment value with their muscle men, exploding volcanoes, sacrifices to Moloch and marching Roman armies.

Cecil B. DeMille and D.W. Griffith took the genre to its early heights from the 1910s-1930s, with spectacular films like Intolerance (1916) and Cleopatra (1934). In the years before the Production Code, these films often pushed the boundaries of sex and carnivalesque violence. In DeMille’s infamous The Sign of the Cross (1932), for example, Claudette Colbert takes a sexy milk bath (see below), and the film wraps with a lurid finale featuring Amazon women fighting pygmies, and nubile Christian martyrs (including one played by burlesque queen Sally Rand) served up to gorillas and crocodiles. The genre’s heyday, however, was in the 1950s and early ’60s — the era of ‘Hollywood on the Tiber,’ when the studios decamped to Rome to recreate the ancient world. This period was dominated by American-made Biblical epics and Italian-made serials about Hercules or other burly, mythical heroes like Maciste. Lavish spectacles like Ben-Hur, The Robe and Quo Vadis saved Hollywood from the economic encroachments of television, and minted a new generation of masculine stars like Charlton Heston, Kirk Douglas and Richard Burton. And the movies themselves got bigger, with new formats like CinemaScope and VistaVision filling movie houses with sumptuous panoramas of ancient lands.

Capping off the era was Elizabeth Taylor’s magnificently grandiose Cleopatra (1963), a movie so big that today it would’ve cost over $330 million to produce — possibly because the film’s dubious Italian accountants claimed Liz Taylor ate twelve chickens and forty pounds of bacon each day for breakfast.

Nothing about peplum movies — not even their catering — is small. After a long drought, broken by only a handful of films like Ray Harryhausen’s magical Clash of the Titans (1981) — and Conan the Barbarian (1982), featuring Arnold Schwarzenegger as the bone-crushing Cimmerian warlord — the Sword & Sandal genre was revived splendidly in 2000 by Ridley Scott and Russell Crowe in Gladiator (see above). Gladiator took advantage of new digital technology to convincingly recreate the ancient world in telling a blood-soaked tale of Rome’s slide into imperial tyranny. Frank Miller’s 300 then ‘modernized’ the genre in 2006 — recreating the Battle of Thermopylae with video game-style action, post-9/11-style speeches about the value of freedom, and Gerard Butler providing the most impressive display of abs since Franco Columbu was Mr. Olympia.

Fortunately, although recent projects like Wrath of the Titans and John Carter are doing little to build off the momentum of those films, Hollywood still seems to have confidence in peplum movies. Brett Ratner and The Rock are plunging ahead with their adaptation of Hercules: The Thracian Wars, and Russell Crowe recently signed to star in Darren Aronofsky’s Sword & Sandal-esque movie about Noah. The 300 prequel Battle of Artemisia still moves forward, and Wrath of the Titans director Jonathan Liebesman wants to direct movies about Julius Caesar and Odysseus. Plus Mel Gibson’s Maccabee movie is still in development (a bit awkward, that one), Ridley Scott and Paul W.S. Anderson are both doing Pompeii projects, Angelina Jolie is still circling around an expensive Cleopatra film — and Steven Spielberg is even considering directing Gods and Kings, an epic telling of the life of Moses.

While it’s heartening that these projects are still going forward, no one wants them to suffer the same fate as John Carter or other recent, lackluster efforts. Audiences probably deserve better than what they’ve been getting, so with that in mind it’s time to take an unflinching look at what’s working — and not working — about this latest crop of Sword & Sandal movies. Movie creatures haven’t been quite the same since Ray Harryhausen retired, but his legacy is still alive and kicking (and growling) into the digital age. Recent creatures like Wrath of the Titans‘ Kronos (see above) or the club-wielding cyclops, or the White Apes in John Carter, are awesome beasts to behold — especially in IMAX 3D and 7.1 channel sound. And whereas back in the 1950s and ’60s only Harryhausen’s movies had credible creatures (even the wonderful Italian peplum movies so often got dragged down by paper mache dragons and rubber lizards), nowadays most Sword & Sandal flicks can be expected to feature a decent mythical beast or two.

2) Great Use of Weaponry

Today’s Sword & Sandal stars like Conan‘s/Game of Thrones‘ Jason Momoa or Immortals‘ Henry Cavill (who’s also the next Superman) really look like they can fight, or at least like they’re trained and know their way around weaponry. And while that isn’t a prerequisite for peplum heroics — Tony Curtis never needed it — the ability to use a sword, spear or hammer axe convincingly is one of the key selling points of any Sword & Sandal hero. Tarsem’s Immortals featured some wildly imaginative costume and production design (see above), blending North African, Indian, Persian and Greek influences that enlivened the look of Sword & Sandal cinema for the first time in years. Plus, Disney’s John Carter managed some fabulous retro/19th century sci-fi designs, for the few people in the audience still awake after the first hour.

Let’s face it: the Brits, along with the Aussies and the Irish, just sound better doing this stuff right now than their American counterparts, and are saving a lot of otherwise sub-par films. In Wrath of the Titans, for example, stodgy dialogue is routinely rescued by the redoubtable Liam Neeson and Ralph Fiennes — both of whom could probably make an ad for shaving cream seem portentous.

When it comes to Sword & Sandal movies, size really does matter. And while today’s 3D/IMAX-sized movies can’t compare in scale to films like Howard Hawks’ 1955 CinemaScope epic Land of the Pharaohs (one scene in that film featured over 9,000 extras), new films like the IMAX 3D version of John Carter still offer a reasonable facsimile of what those widescreen spectacles of old were like.

WHAT’S NOT WORKING ABOUT THE NEW SWORD & SANDAL MOVIES:

1) Where did all the Love Goddesses go? Easily the biggest problem with today’s Sword & Sandals movies — although this is less of a problem on cable TV shows like Spartacus or Game of Thrones — is the lack of good female characters. The wicked queens, love goddesses and slave girls that once made peplum movies so famous (and scandalous) are almost completely gone — leaving little for the men in these films to do other than chop each other to pieces. No more dancing girls, pagan orgies, or virgin sacrifices — what fun is that? In the ’50s and ’60s, tantalizing (and usually Italian) women like Sophia Loren (above), Rossana Podesta, Gina Lollobrigida and Sylva Koscina appeared routinely in Sword & Sandal epics and made life exciting for the gods and mortal men who coveted them — or feared them. They should be welcomed back.

2) Spoiled Heroes with Super-powers and Abs

The big new trend nowadays — from peplum films to comic book movies — is to have annoying, demigod heroes with abs who fret over their supernatural powers. Petulant guys like John Carter or Perseus in Wrath or Theseus in Immortals who can’t decide whether the world is cool enough for them to save. It’s tiresome. Kirk Douglas didn’t fret over his ‘powers’ or his abs in Spartacus, Ulysses or The Vikings, probably because he didn’t have any — he just had courage (also the cinema’s best chin). Today’s peplum heroes should have fewer powers and flabbier abs (like Victor Mature), and more backbone. They should be more stoic, and stand for something beyond their own narcissism — like freedom. You know the kind I’m talking about, because they’re in every new Sword & Sandal film: the fake digital armies (see above, from Immortals), with endless rows of digital soldiers wearing digital armor — marching and grunting into battle as one. They always appear in a scene that’s supposed to be ‘awe-inspiring,’ but that instead comes across as software-driven and phony. Memo to Hollywood: spend the money and hire some real extras.

In an effort to create ‘edgier,’ more ‘realistic’ Sword & Sandal movies, some filmmakers have come up with the idea of populating the ancient world with guys who’ve never bathed, shaved, or washed their clothes. Wrath has one such guy, an unshaven dude with matted hair named Agenor, who looks like he spent the last six months occupying Zuccotti Park. He actually gets more on-screen time than actress Rosamund Pike (seemingly the only female cast member), who plays the film’s pretty blonde heroine. A related idea in today’s peplum cinema is to have everything — buildings, armor, vegetable stands — sprayed with mud and dirt for that ‘authentic,’ antediluvian feel. It may come as a shock to some filmmakers to learn that people in the ancient world actually had access to water, and were able to wash themselves.

Here’s the key to a good Sword & Sandal movie: it wears its heart on its sleeve. Classics like Robert Wise’s Helen of Troy, Kirk Douglas’ Ulysses or Anthony Mann’s The Fall of the Roman Empire not only had more intelligent, literate scripts; not only were they better researched, and more faithful to the spirit of their original stories. There was also an element of sincerity and passion to them in how they depicted the big Sword & Sandal themes of freedom, romance and religious faith. In more recent years, for example, a film like 300 took the theme of freedom seriously, and cleaned-up at the box office. By contrast, I read recently that in Disney’s early meetings on John Carter, the first things executives discussed about the film were … the merchandizing and the sequels. It showed. While today’s 3D/IMAX-sized Sword and Sandal movies have modern technology and other advances going for them, they don’t always understand the human element that made classics like Ben-Hur (see above) or Spartacus work. Of course, assuming Hollywood doesn’t want more $200 million write-downs on its books, perhaps that will start to change.

The good news is that when Sword & Sandal movies are done right, people still love them. Movies about the ancient world stir our imaginations, and give us a sense of continuity with the past. They also speak to our most cherished values of liberty and faith — often while providing scandalous fun. Hollywood is right to believe in these projects — Cecil B. DeMille did, and made a career out of them for 40 years — so let’s hope filmmakers can up their game over the next few years, and make the ancient world as exciting as it used to be.