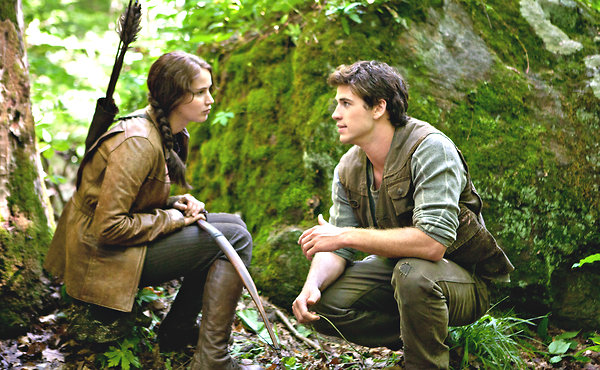 KATNISS EVERDEEN, the 16-year-old “Hunger Games” warrior who has torn through the box office, is one of the most radical female characters to appear in American movies. The film’s stunning success can partly be explained by the print sales of Suzanne Collins’s trilogy of young-adult novels, which jumped to more than 36.5 million in March from 16 million in November, suggesting that the anticipation for the film was feeding demand for the books. At the same time there’s more to Katniss fever than page-screen synergy. Manohla Dargis and A. O. Scott, the chief film critics of The New York Times, examine this complex, at times contradictory character.

Jennifer Lawrence stars as a teenage survivalist in a recycled American frontier myth in “The Hunger Games,” a film adaptation of the Suzanne Collins novel.

MANOHLA DARGIS One reason Katniss may be speaking to so many is that she doesn’t just seem to be a new kind of female character but also represents an alternative to an enduring cultural type that the literary critic R. W .B. Lewis described as the American Adam. Lewis saw this type as “an individual emancipated from history, happily bereft of ancestry, untouched and undefiled by the usual inheritances of family and race; an individual standing alone, self-reliant and self-propelling, ready to confront whatever awaited him with the aid of his own unique and inherent resources.” Katniss, by contrast, is never liberated from history or ancestry, but deeply formed by them and they, as much as her awesome archery skills, help her through the slaughter of the games.

A. O. SCOTT I see the outlines of a future American Studies dissertation emerging in the mist. In your review of “The Hunger Games” you perceptively align Katniss with James Fenimore Cooper’s Natty Bumppo, one of the archetypal figures in the literature of the American West. He is a socially marginal figure, a loner who defends the fragile society of the frontier without ever becoming part of it. His mythic descendants include the righteous loners of classic westerns: Shane, John Wayne, Clint Eastwood.

And also now Katniss. She is different, though, not only because she is a woman but also because she is anything but a free, rootless figure of the wilderness. The paradise she comes from has been colonized and enclosed. It looks like Daniel Boone’s Kentucky, but it has been given the soulless bureaucratic name District 12. She is transported to an artificial garden where the beasts are special effects, and cameras record every moment of solitude or intimacy. There she fights for her life, and for kin and home, cruelly pitted against other children who are doing the same.

All of this means that, as she sprints through the forest, Katniss is carrying the burden of multiple symbolic identities. She’s an athlete, a media celebrity and a warrior as well as a sister, a daughter, a loyal friend and (potential) girlfriend. In genre terms she is a western hero, an action hero, a romantic heroine and a tween idol. She is Natty Bumppo, Diana the chaste huntress of classical myth, and also the synthesis of Harry Potter and Bella Swan — the Boy Who Lived and the Girl Who Must Choose.

Ms. Collins’s novels are able to fuse all of these meanings into a credible character embedded in an exciting and complex story. I think, in spite of some shortcomings, that the movie also succeeds where it counts most, which is in giving new and die-hard fans a Katniss they can believe in.

DARGIS Certainly the character is strong enough to survive Gary Ross’s direction and the miscasting of Jennifer Lawrence, who turned 21 around the time the film wrapped. My problem with her in the role (which, needless to say, isn’t her fault but that of those who hired her) is that she looks like the adult woman she is instead of a teenager who, a few years before the story starts, as Katniss says in the first book, had been “skin and bones” and, as a consequence of those hungry years, looks like a “young girl.” It’s hard not to wonder if the producers cast an adult to make the violence more palatable; it’s also hard not to think that they cast a woman with a rocking body instead of a young girl partly because they were worried that guys wouldn’t turn out for a female-driven story.

Yet Katniss is such a sensational character that she fires up your imagination, even when Mr. Ross seems intent on dampening it, and to embrace all those identities you mentioned. That she embodies these different roles at the same time makes her feel new, particularly because in contemporary American cinema, female characters are (still!) often reducible to type (mother, girlfriend, victim). That’s worth looking at, as are the ways she differs from other heroines, including one of the greatest, Ripley in the “Alien” series. Katniss isn’t locked into gender. She has assumed her dead father’s responsibility as the family provider and is also a mother surrogate for her sister, Prim. But Katniss doesn’t shift between masculinity and femininity; she inhabits both, which may mean that neither really fits.

SCOTT: I’m not sure that “both” means “neither.” The confusion of gender identities has been a staple of movies since before Marlene Dietrich first put on a top hat and tails. What’s interesting about pop-culture heroines like Katniss — and also Lisbeth Salander of “The Girl With the Dragon Tattoo” and its sequels — is how many different and contradictory gender codes they absorb. Lisbeth is a feminist avenger, an antisocial nerd, a survivor of abuse and an avatar of autonomous, polymorphous sexuality. At least in David Fincher’s recent movie adaptation of “Dragon Tattoo,” she was also pretty clearly a male fantasy, to be ogled and exploited by the cool, predatory gaze of his camera.

Katniss is not quite that. Yes, Jennifer Lawrence is beautiful, but I don’t think she is miscast. For me the key to her performance is her face. Her features are grave and somewhat inscrutable, and she is at once a watchful, reactive presence in the world of Panem and a determined, free-thinking actor within it.

This makes her a perfect surrogate for the reader turned viewer, who perceives this dystopian world through her eyes and who also imagines him- or herself in Katniss’s place. I say him or her because “The Hunger Games” allows — or maybe compels — a kind of universal identification that is rare, or maybe even taboo. It’s generally assumed that girls can aspire to be like Harry Potter or Spider-Man, or can at least embrace their adventures without undermining their own femininity. But at least within marketing divisions of the culture industry, it is an article of faith that boys won’t pretend to be princesses.