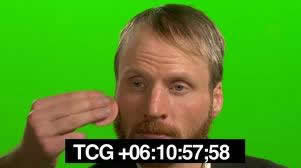 The Wisconsin Film Festival promises many nuanced, complex characters, but the subject of Glue Man is insidiously flat, generic, a blank slate. In the short film by Wisconsin natives Joe Pickett and Nick Prueher, creators of Found Footage Festival, and co-writer Alex Pickett, Prueher plays a talking head-for-hire who helps documentary filmmakers tie their work together with clever transitions and bullshit “expert” commentary. He’s both a complete nobody and an esteemed authority on everything from Jonestown (an “oldie but goody,” in his line of work) to cocker spaniels. It’s as if Kafka’s “A Hunger Artist” has found a new place in today’s fevered content landscape. This comic mockumentary even boasts stunt-documentarian Morgan Spurlock and a resplendently bowl-cutted Ken Burns, both testifying to the utility of a “glue man” and coming off satirically cavalier about their own craft. While the festival is going on, Pickett and Nick Prueher will be in Canada debuting a brand-new version of the Found Footage Festival, which Pickett says has become “85 percent of a full-time job.” (See the trailer here) Pickett spoke with dane101 about the inspiration for the film and the expert infestation that’s afflicting journalism and documentaries.

Glue Man is interesting to watch from a journalism perspective, because as a reporter, you can get into this trap of just looking for sources who will validate a hunch or help tie things together with authority.

Exactly, yes. That was kind of the same way that we approached it. Nick and I both worked on a documentary [2007’s Dirty Country], we started in 2003, and worked on it for four and a half years, and we realized the value of a “glue man.” I don’t think they are actually called that. I think we invented that term while we were doing this documentary. But we realized, to paste a story together, especially to paste a narrative documentary together, you need somebody who is good enough who can give you those succinct sound bites that can get you from point A to point B. In that documentary, we found our guy. I don’t want to say it was shameless, but it felt kind of shameless, every time we were like, “We’ve got to get from this point to this point. Let’s call up Mark, we’ll tell him what we need, and we’ll nail it, every time, one take.”

And was this Mark an expert on anything in particular?

No, he wasn’t. For this, it was mostly just getting us through the narrative. That is kind of when we got introduced to this concept of needing a glue man. We do a lot of interviews for Found Footage, we do a lot of morning radio shows and stuff like that, and Nick is so good at them. He is so good at finding a great sound bite, and the anchors just cream their jeans over these short things that he can say. He just nails it. He just has this knack for it. So he’s kind of already a glue man for this Found Footage stuff we do. So after we’d do these interviews, we’d be driving in the car and I’d just challenge him. I’d say “Get from Winston Churchill to Woodstock.” It was kind of a game we played. And he would just nail it every time.

Why is it important that the character in Glue Man is so good at spouting clichés?

I think for him, it defines him. Somehow he kind of fell into this thing that he was good at. When you find something you’re good at, you just kind of ride it, and he does, no matter how shameless he is with it. He’s kind of over the idea of feeling that shame for being kind of, “Oh, you know, I could do Hitler documentaries in my sleep.”

Sometimes when you’re telling a story, you need someone to enforce the obvious or the cliché, but with authority, so that you as a journalist or documentarian don’t look stupid.

There’s a Syracuse professor who has been interviewed by the New York Times 78 different times, and it’s stuff ranging from, like, computers to mobile storage units to pop-culture stuff. There’s a real guy out there. [After we made Glue Man], I was like, “Man, we should’ve just made a documentary about this guy.”

It’s something of a cottage industry. There are publicists who just shop “experts” to journalists!

The thing that always kind of bothers me is there’s that underlying phoniness to it. They’re really just promoting themselves more than trying to be informative with something. I guess some of Glue Man is driven by that contempt, for maybe what documentaries have become at this point. I was watching an A&E documentary—this is like right around when we were taking about doing Glue Man—on Pee-wee Herman, and it was 60 minutes long, and I love Pee-wee Herman, but after 20 minutes, it just felt like they were repeating information, like, who is this guy talking about Pee-wee Herman, and why do I care what this guy has to say? This guy has a blog. I don’t care what this guy has to say. It just needed to be a 20-minute documentary, but they just stretched it out, and so much fluff.

So why then do “experts” go unquestioned in that context?

I’ve kind of experienced this firsthand with these morning news shows: They need somebody to talk about this. They have a need to kind of fill up space and get this running time out. I think some audiences [question them]. I think that documentaries have become a little bit fluffy. They’re kind of becoming popcorn. I think there are documentaries out right now like that. I sat and watched that whole Pee-wee Herman documentary. I didn’t think it was good, but I watched the whole thing. I think it’s becoming more regarded as entertainment than it is educational.

This is a short film, but was there any temptation to find more pathos or background for this Glue Man character? He’s very deliberately a blank slate.

I wish that we would have. I wish that we would have followed him around maybe more verité style. It’s a little more talking-head right now. But I guess we just wanted to get that message across. The pathos of the character wasn’t as important to us. We kind of come from a comedy background anyway, so our main focus was to make it funny.

Were Ken Burns and Morgan Spurlock pretty game for this when you asked them to be in the film?

They were, surprisingly. I don’t know either of them. I’ve never met them before. They were total cold calls, and we shot this thing over the holidays, and we cut together just a one-minute trailer and we sent it to [their receptionists]. I was shocked at how much they were receptive and returned our e-mails. Then we heard back from both of them. I think we had 2 minutes to shoot with them both times, but we just set it up and got out of there. Ken Burns had so many other lines that we wrote for him that we didn’t include in the movie because we couldn’t fit them in. We got him saying things that we couldn’t believe. Well, you saw the one where he’s like “nobody checks up on this stuff!” He didn’t see any of the lines in advance either. We had him say one line, “I am really looking forward to using Nick in my next documentary about whether or not ghosts are real.” We tried Errol Morris, and he was interested but the schedules just didn’t jive. Werner Herzog flat-out said no. We tried everybody.

There’s one part where the film cuts to some footage of Nazis marching while the song “Joy To The World” plays, in order to demonstrate the Glue Man’s ability to introduce ridiculous musical segues. That’s not supposed to make sense on some level, is it?

No, that was us being funny. And just kind of going too far with the ridiculousness of documentaries. There’s a hyperbole in there.

Do you see this whole problem of experts for hire polluting other aspects of society, like, say, the court system?

I think Paradise Lost, the documentary, they had a witness who was on the stand who was a Satanist expert, but he had no schooling in it and they just called him a Satanist expert and he was getting paid. There’s no license for being an expert. All you have to really say is that you are an expert.

There’s a documentary called In Anita’s Wake, about Florida’s gay adoption ban, that exposes the State of Florida for paying a complete crackpot witness to testify that gay parents were somehow defective. And of course, they find out there’s no scientific basis to say that, but the state paid him to say so in court.

Yes! I had a similar thing myself. I got rear-ended and had some neck pain, and this doctor, for $500, was willing to write up a report saying that—you don’t even have to tell the truth anymore!

It’s ironic, because all this unreliable “expert” commentary comes from this demand for something authoritative and true.

Exactly. We just need an answer. We need to know who to blame. There can’t be any grey area.

The worst perpetrators of the “expert” thing might be all the VH1 shows. You’ve always got a handful of stand-up comics and a few random journalists, all throwing in commentary, and half the time you can’t even tell who they’re supposed to be.

You know, I think if you traced it back, I feel like VH1 was one of the first to do that, just having the quick, funny sound bite to help you through the scene.