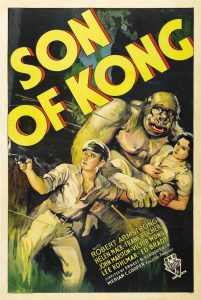 No one ought to expect lightning to strike twice. No one ought to expect a sequel to King Kong, easily one of the greatest films of all times, to be that great, especially one cranked out in only 8 months, as this one was. Plus, the budget of this one was less than 1/3 the budget of the original. This is why the special effects are so few (and so much less than those of the original). Still, Son of Kong is some fun RKO entertainment. Robert Armstrong is back as Carl Denham, and he is good, although a little weary after his adventures in the first one (it has been a month since Kong died). Fay Wray does not return, and they have replaced her character with a stowaway girl played by Helen Mack. No, she’s no Fay Wray, but she’s cute and likable. Charlie, the Chinese cook, is back with a bigger part. Although he seems nothing more than a racial stereotype now, for the time his role was probably seen in a better light. He may speak pigeon-English, but he’s seen as a human being by the other characters.

The son of Kong is unfortunately more humanized than Kong was (they tried to make him seem more like a curious animal, which I think was the right decision), but he’s a chip off the old block, at least when it comes to monster fighting. The animation is cruder, but it is passable. It’s a decent flick that runs at only 70 minutes. Don’t expect too much more.