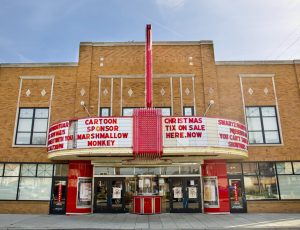 At one time in all towns and cites a theatre manager was a very important person. Next to the mayor, the place in society that the theatre manager filled was pretty close to the top. Doors and favors could be had by just whipping out a couple of tickets out of the managers back pocket. They walked with pride, dressed with distinction and they knew they held the keys something very important within their community. If you were the manager of one of the great downtown theatres that was something else.

Once, long before the dawn of the multiplexes, there were movie theaters in almost every small town or city neighborhood.They usually were pedestrian-oriented and integrated into the streetscape, providing a rare semi-public meeting place that wasn’t a bar or street corner. You can see the ghostly remnants and darkened marquees of many of these theaters along the main streets of the Nation. Some holds a Starbucks. Some houses cell phone and clothing stores., some have been reborn as a Dollar General.

Last Thursday I premiered a movie, Operation Dunkirk that I produced. The premiere happen at the amazing Historic Artcraft Theatre, a theatre re-invigorated by the efforts of a vital not for profit and supported eagerly by the whole community. Four hundred seats were sold for the premiere with about a 100 seats given away. I was immediately surprised at the age of the audience, the majority was 50 and above, a large number of working class. This was an audience that had long been forgotten by the Hollywood studios, but this audience remained and then a movie came to a screen which appealed to them then they came in droves……on Thursday night no less. I was mobbed by these seniors coming out of the theatre. They were pleased to have movie which appealed to their generation in a movie theatre. It was a night on the town that they were missing.

These people were hungry for this experience, craved it……but Hollywood had long denied them their entertainment.

In Europe the rise of the Pop-up theatre is satisfying the demand. Thousands of screening are happening in England every summer and up to 2100 are attending these screenings at $21 a pop ..thank you very much. Because of the weather both hot and cold the model might have trouble here in North America but there are models like the Belcourt in Nashville, Tennessee , The Historic Artcraft Theatre in Franklin Indiana and the Lincoln 4 in Lincoln Nebraska suggest alternative theatre ownership model and pathways to success.

The drive to keep theaters alive may be due in part to nostalgia. People generally associate movies with good times.Whn the lights go down, the members of the audience have the same experience collectively no matter is they are the town doctor or the town drunk. Movies are one of the great social levelers of a community. “No society can prosper without centers of civility and public sociability. This is the role that the cities and their amusement centers have always played” (Nasaw 1993). Saving movie theaters is one way local citizens band together to solve a problem, and build a stronger community.

Save The Movie Theatre save the downtown….it is simple as that. Organizations like Main Street USA spend millions of dollars every year to revitalize downtown cores across America. It is very simple in my mind unless you rebuild the idea of a community gathering place, a place of socialization and yes…of culture then you have little chance to build a sustainable and ongoing downtown model. You have to give folks a reason to come down town and to spend money downtown. The best tool for this revitalization in the resurgence of the tried and true community based movie theatre. Time and time again it has been proven as the surest way of attracting crowds back into the downtown core.

If Main Street USA was truly focused on re-vitalization of the downtown core of small town USA….they would start heading to places ;like the Historic Artcraft Theatre and start taking notes.

Have a good week,