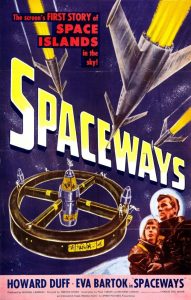 The title and the poster tend to set the viewer up for a large disappointment with this one, a less-than-gripping film from director Terence Fisher, laudable mostly for the fact that it was made so early in the 1950s. The story is based on a radio play by Charles Eric Maine, with a plot that smacks just a little of an Alfred Hitchcock movie.

Howard Duff plays an American scientist involved with the British space program (they actually had one of those, once). His wife is having an affair with another scientist (Andrew Osborn) who is also a spy. When both wife and lover disappear, an investigator (Alan Wheatley) suspects Duff of murdering them and disposing of the bodies by placing them in a new satellite which is sent into orbit!

There’s only one way Duff can clear himself: blast off in a rocket, retrieve the satellite, and bring it back for inspection. He takes Eva Bartok (heroine of ‘The Crimson Pirate’) with him.

I won’t divulge the ending, but it is a twist. The film’s slow pace lessens the tension, and the special effects consist largely of stock footage and a few scenes cribbed from ‘Rocketship X-M’. Definitely a case of the poster being far better than the movie