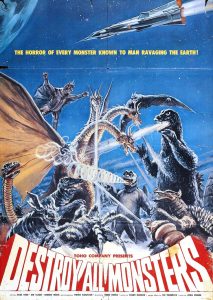 If you’re looking for a real rock ’em sock ’em monster bash, look no further. this one’s got them all: Godzilla, Rodan, Mothra, Ghidora, Gorosaurus, and the rest. The only one that seemed to be missing was King Kong. It’s really just an excuse for monsters to stomp around and destroy stuff, but you’ll have a great time watching them do it. I like the plot about the aliens in this one, none of the other films did it quite as well, except “Godzilla vs. Monster Zero” did fairly well. I remember watching this one when the sci-fi channel held Godzilla film marathons, and it remains one of my most fondly remembered entries. I love the scene where Akira Kubo (the guy from “Attack of the Mushroom People”!) rips the transmitter earrings out of that lady’s ears, and when she looks at her hands, they’re covered with blood! The special effects were well done, and I didn’t think that the dubbing was all that bad. All in all, no complaints.