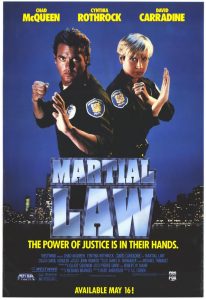 Chad McQueen stars as Sean Thompson, a cop whose martial-arts skills are so good that even his brother Michael calls him Martial Law more often then Sean. Sean teams up with another cop, Billie Blake (Cynthia Rothrock) to beat bad-guys up and stop a gang of car-smugglers and drug-runners under the command of Dalton Rhodes (David Carradine). Sean and Billie are going to need all of their skills to take on Dalton, as he has a nasty habit of killing nearly everyone he meets.

Plot? What plot? Just remember the term ‘Dim Mak’, and you’ll know how Rhodes goes about killing people. There are some points where McQueen and Rothrock seem to forget that they are in an action B-movie, as McQueen’s character laments that he abandoned his brother to go to Hong Hong, and has nothing to show for it apart from martial-arts championship trophies. Awesome.

‘Martial Law’ has some nice fight scenes, although none stand out as being anything special. It is entertaining, and all that really matters is we get to see Cynthia Rothrock and Chad McQueen in plenty of butt-kicking action.