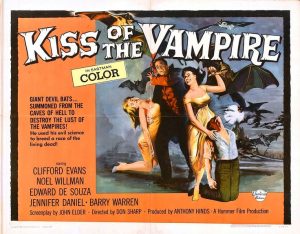 A likable, attractive couple on their honeymoon become stranded in the middle of nowhere when their car breaks down. They do find an inn…and are mysteriously invited to a nearby castle where Dr. Ravna lives with his children. Seems Ravna and his children are the heads of a cult of vampires…and want the couple to join them.

Strange, moody but intelligent horror film dealing with a vampire cult. Despite the subject matter there isn’t much blood–just a very bloody opening and an all out attack at the end–that’s all I’ll say–I don’t want to spoil it for anyone:) It’s beautifully filmed in rich color–the recent DVD release is exceptional. The acting is all good and there’s a eerie masked ball sequence that is a highlight. My only complaint is the storyline starts to falter at the end and some things don’t make sense. Abrupt ending too. Still this is easily the most beautiful vampire film ever made–it should be seen just for the sets, costumes and color.