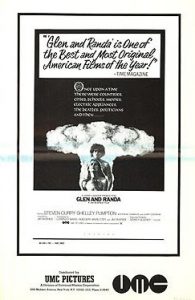 One thing’s for sure about this movie – you won’t think of The Rolling Stones’ “Time is on My Side” the same way again, following a scene where the few remnants of society in a post-apocalyptic wasteland – we don’t see the apocalypse, it just happened – are sitting around at night and there is this strange curiosity called a record player that somehow, despite electricity and power being something of a rarity, can play a record. They have a single of the Stones song, and it sometimes goes a little in and out of track, warbling a bit, and everyone just sits around listening to it. Impassive, just taking it in. What is this thing called ‘Music’ after all?

It’s one of those oddball moments, which is funnier perhaps on paper than how it’s played, that comes out of Jim McBride’s film of Glen and Randa. Watching this film you get the impression that it’s almost like a bizarre, wild-child style documentary on what would happen to people years and years down the line after society had been broken apart with no infrastructure to set it up. Oh, and there’s sex between these two crazy kids and lo and behold Randa becomes pregnant. So that becomes an issue as the two of them go wandering around, trying to find food, shelter, and some place they can call home.

McBride’s film is a true oddity, shot in grainy film and done to look like some sort of artifact of a time and place (maybe intentional, maybe not), and the two leads are non-professionals. You know, for example, when Steven Curry is shouting out the same ‘TIME IS ON MY SIDE’ over and over, as it’s in his head, this is a performance that is stripped down to its essentials. It’s either a very good performance or a bad performance it that makes sense, but this guy is always in it, always showing this crazy kid’s curiosity about the world, about the “City” that could be out there – he learns this through his tattered comic book remains he carries with him – and Shelley Plimpton is the same way.

As with the McCarthy book The Road we don’t get many other people here. There is the tribe early on, but Glen and Randa can’t stay there as it’s too unstable and Glen wants bigger and brighter things. The last “act” as it were of this gangly narrative takes them to a beach where Randa may finally deliver her child into the world. The ending itself is as bizarre as anything else in the film, but less logical. Why does Glenn do what he does, or Randa, or the baby, or the old man who has another few remnants to help them? In some ways the movie has not stood the test of time, but in a way it has.

It’s longish-freaky-looking characters are out of the late 60’s, victims of the Flower Power movement, but they’re also real and tactile and are fascinating to watch just from an anthropological point of view. In other words, it’s not like a Mad Max post-apoc future, there are no motorcycle gangs or the like, it’s, again, stripped down to where nature has taken over the Earth in major ways. If anything it’s low-budget-ness shows a little too much, but the script via Rudy (“Two Lane Blacktop” Wurlitzer makes this experimental and low-key in good ways. What they don’t got, they make it an advantage.